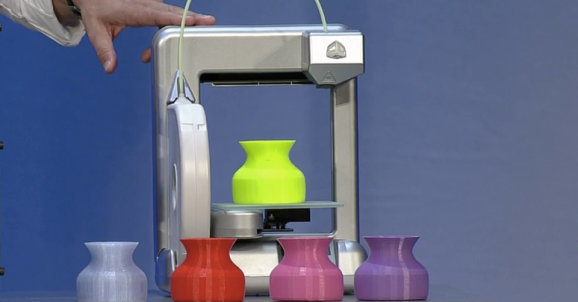 Microsoft may not make its own 3D printers, but it sure is throwing its weight behind the technology.

At the company’s Build conference today in San Francisco, Microsoft announced its plans to sell devices like the MakerBot Replicator and 3D Systems Cube in its retail stores and online.

With the move, Microsoft joins retailers like Amazon and Staples, which both recently announced their own plans to sell 3D printers.

All of this is especially big news for 3D printing giant Stratasys, which announced its plans to acquire MakerBot last week. As both MakerBot CEO Bre Pettis and Stratasys CEO David Reis hinted at the time, one of the most important components of the acquisition was that it will help decrease the time it takes for MakerBot to manufacture its printers. This, in turn, means that it can create more of them, giving companies like Amazon, and now Microsoft, more stock to work with.

Microsoft’s retail news comes on the same day it announcement that Windows 8.1 will feature native support for 3D printing, which is meant to be just as easy as plain old 2D printing.