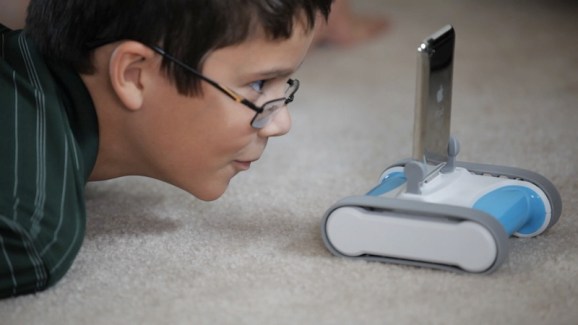 A child stares at a dimunitive Romo, an iOS-powered robot.

If Keller Rinaudo is right, a lot of ambitious hardware hackers are about to get a cold, hard smack in the face from reality.

Rinaudo is the chief executive of Romotive, an 18-person startup that makes a cute, iPhone-based robot called Romo. A new version is out, and it makes Romo into a tiny, kid-friendly telepresence robot. (Romo was also the star of VentureBeat’s Mobile Summit earlier this year with a crowd-pleasing interactive demo.)

Romo began life, like many new hardware startups, as a Kickstarter project. But getting to the next step — from a successfully funded Kickstarter to a full-blown manufacturing operation — has proved surprisingly challenging, Rinaudo told me.

“It is so hard to produce stuff at scale,” Rinaudo said. “You don’t appreciate Apple or Samsung making millions of new devices every six months until you’ve tried to do it yourself.”

Hardware startups — especially those backed by Kickstarter fundraising projects — are increasingly popular. High-profile successes like the Ouya game console and Pebble smart watch have shown that a good idea can raise millions of dollars, opening a way for garage tinkerers to turn into gadget tycoons. But translating your DIY ambitions into manufacturing reality is difficult, and many of these Kickstarter hopefuls will fail.

I asked Rinaudo for one example of something he learned, and he laughed. “Just one example?”

The first thing, he said, is that you need to spend a lot more time than you think getting your prototype exactly right. For example, Romotive got its prototypes about 90 percent complete, figuring the team could iron out the details during the manufacturing process. They figured wrong.

“Once you’re trying to set up an assembly line and make robots at scale, it’s really hard to go back and change things,” Rinaudo said.

“We would have saved a ton of money and time if we’d invested more in prototyping and getting things right early on,” he said.

Romotive was able to pull through because they had several experienced roboticists (former iRobot employees) who had worked through these issues before. In fact, the factory in Shenzhen that will be making Romo also manufactures about 2 million Roombas for iRobot every year.

Romotive has a $5 million series A, raised last October, in addition to a $1.5 million seed round before that. Capital like that goes a long way toward helping a company get through difficulties such as Romotive has faced. The company just completed a move from Las Vegas to San Francisco and is preparing to ramp up a production run of tens of thousands of robots.

For other Kickstarter wannabes, however, Rinaudo is less optimistic. In fact, he predicts many hardware-oriented Kickstarter projects will soon fail.

That’s because many projects are created by people who say they have a prototype and just need backing to get it into manufacturing,

“You spent a year prototyping? It’s going to take you two years to get it into manufacturing, because manufacturing is twice as hard,” Rinaudo said.

Romotive is not the only company to discover this difficulty. Ouya raised a gigantic $8.6 million Kickstarter fund to create a cheap, Android-based console, but Ouya ran into production delays (and angered its early supporters as a result). GameStick is also facing manufacturing delays. The $10 million-plus Kickstarter project Pebble watch finally shipped in January but only after many delays. A CNN analysis of the top 50 Kickstarter projects in December found that 84 percent of them were delayed, and a quick scan of the projects suggests that many ran into manufacturing problems.

The problem isn’t confined to companies with their roots in Kickstarter. Lark, a maker of fitness- and sleep-tracking gadgets, got a terrific early start but has recently run into trouble with the consistency and reliability of its products.

Fortunately for startups, there are places to turn for help.

PCH International specializes in facilitating Asian outsourcing for companies that need help finding manufacturing partners, and it has recently opened up an incubator for hardware startups called Highway 1. (Get it? California’s Highway 1 is also called the Pacific Coast Highway, or PCH.)

Brady Forrest, who spent eight months on the investment team at Khosla Ventures and before that spent six years organizing events for O’Reilly, will run Highway 1. The incubator’s goal is to help fledgling hardware makers get from the prototype to the manufacturing stage.

“When they want to scale up, they find there’s a huge difference between making the first 10 and the first 1,000,” Forrest said.

Echoing Rinaudo, he said that people run into a host of problems, from securing (and managing) working capital to setting up a production line to yield management (how to deal with the fact that not every gadget coming off a factory line is going to work perfectly).

Forrest told me he’s looking for companies with two or three people and “an object,” most likely something that’s connected to a smartphone or tablet and augments it with additional capabilities, much like a fitness sensor or robot. Highway 1 will take an equity position in the company and will help it with its product development and manufacturing process, by offering PCH services at a discount.

In short: Yes, there are a lot of reasons investors should learn to love hardware. And, as I wrote earlier, the DIY spirit is helping accelerate a revival of manufacturing here in the United States.

But hardware hackers still have a lot to learn. It is a long leap from Kickstarter to Best Buy.

An earlier version of this story appeared on LinkedIn Today. Follow me there!