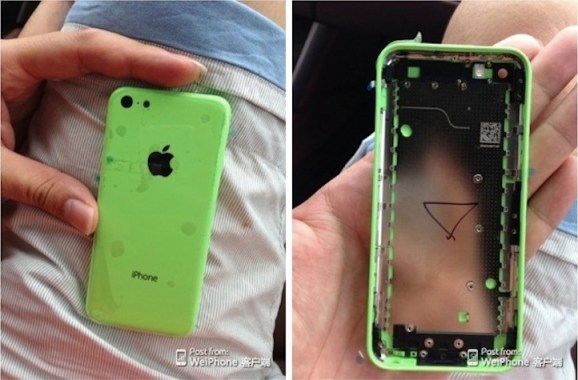 The photo above appears to be the shell of Apple’s next generation iPhone in a rather ugly shade of green, according to French gadget blog Nowhereelse.

Rumors have circulated over the last year that Apple is trying to make a cheaper version of its iPhone — nicknamed iPhone 5S or iPhone Mini —  that could potentially eliminate the need for carrier subsidies and allow the company more leeway during the manufacturing process. A handful of analysts have backed up these claims as well, but obviously Apple itself has admitted nothing.

As VentureBeat previously reported, the cheaper version of the iPhone will likely phase out a case made of glass and metal components in favor of a hard, durable plastic. There’s also some speculation that this cheaper model will come in a variety of colors, much like Apple has done in the past with its line of iPods. The green-ish shell in the photo (or as commenters on MacRumors called it, “radioactive vomit green”) is one of a handful that we could see — with each color being similar to the line of iPhone 4 bumpers the company has previously released.

As far as next-gen iPhone rumors go, this one doesn’t have much credibility. However, someone mentioned that the colorful new iPhone shade might go along with the palate of colors in Apple’s recently revealed iOS 7 redesign, which is extremely drastic compared to all the past versions of the mobile OS. Using a Easter-color iPhone with a drastically altered user interface design is a lot of change and might be risky if Apple wants to keep its long-time customers happy. But then again, Apple’s always preferred that risk over letting its products get bland.

Regardless of whether or not this particular rumor is accurate, I will not be purchasing an Apple product in any shade of vomit.