Threeways in an Uber car are now really easy. Threeway fare-splits, that is.

Uber released a new feature today that makes it dead-simple to split ride fares other people. All you have to do is tap the split fare button and add people to split with. They receive a notification to accept the charge, and once confirmed, Uber will take care of the math. This nifty little feature makes Uber’s service more convenient and affordable, and it gives it a greater edge in an increasingly congested and competitive market.

The fare splitting feature is not only useful and convenient for passengers, but also makes Uber more affordable. Since one person hails the car, that person generally ends up paying, and figuring out how to split a fare can be awkward. Do you just quietly pay for the whole ride? Do you ask your fellow riders to pay you back? Do you ask someone else to get the ride home or buy you a drink in exchange? This nifty little feature eliminates the need for those questions. 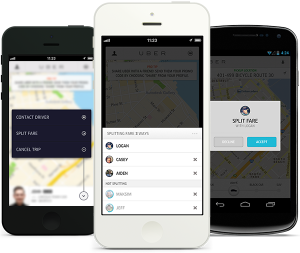 Uber is an on-demand transportation app that seeks to be “everyone’s private driver.” It started out offering a black car service and emphasized luxury as a cornerstone of its brand. Uber’s black cars are more expensive than taxis, and it often attracts customers with comfortable amounts of disposable income who are willing to pay double the price for a higher-end experience.

The company has since added in SUV, Taxi, and UberX (a cheaper midrange car option) to make the service more affordable. Prices on the uberX service with eco-friendly cars are about 10 percent lower than what taxis charge. CEO Travis Kalanick also announced recently that he intended to roll out ride-sharing on the existing Uber platform, posing a direct threat to companies like Lyft and SideCar that operate on a community ride-sharing model. Uber is currently in 35 markets, but Lyft is a popular alternative in six of them. At first, Uber refrained from ride-sharing due to regulatory risk, but “ambiguity” encouraged him to implement ride-sharing as part of the app in “any market where the regulators have given tacit approval.”

“This course of nonaction resulted in massive regulatory ambiguity leading to one-sided competition which Uber has not engaged in to its own disadvantage,” Kalanick said in a white paper. “In the face of this challenge, Uber could have chosen to do nothing. We could have chosen to use regulation to thwart our competitors. Instead, we chose the path that reflects our company’s core: We chose to compete.”

Kalanick is known for being fearsomely competitive and adopting aggressive business strategies. Shortly after competitor Lyft announced raising $60 million in new funding, rumors emerged that Uber is amassing hundreds of millions of dollars in a war chest to accelerate its international growth and compete with taxi companies and ride-sharing startups alike.