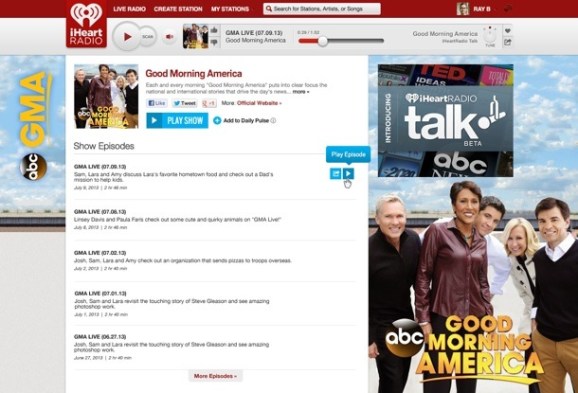 Dubbed iHeartRadio Talk, it allows you to easily listen to the best in talk radio content, as well as the best podcasts, on-demand. Even better, you can mix your favorite shows together — no matter if they originated online or on the radio — and submit your own shows to the platform.

While talk radio remains one of the more popular sources of audio content, podcasts have typically been the domain of the tech-savvy. Now there’s a chance of finally uniting the two audiences. The new feature could potentially unearth some new business opportunities for the Clear Channel-owned iHeartRadio, which touts more than 30 million registered listeners (25 percent of which already listen to talk shows on the service).

With its beta launch today, you can find and listen to shows with iHeartRadio Talk on the web, as well as on iHeartRadio’s iPhone and Android mobile apps. Clear Channel has also partnered with Spreaker, a company that lets anyone create their own podcasts right from their phones, to eventually let listeners submit their own content to iHeartRadio Talk.

According to Brian Lakamp, Clear Channel’s president of digital, anyone will be able to record, publish, and submit a show to iHeart Radio Talk in 10 to 15 minutes.

One of the more intriguing iHeartRadio Talk talk features is the Daily Pulse, a section where you can add just about any talk show you want for a solid stream of content. That should make for more of a “lean back” experience when listening to talk shows. You can even plug in your local news stations to mimic the traditional radio-listening experience.

The podcasting aggregator Stitcher offers a similar way to stream multiple shows, but it doesn’t focus as much on personalization as iHeartRadio Talk. “What Stitcher does, in our view, is a feature,” Lakamp said.

Similarly, Lakamp didn’t seem too worried about Pandora eventually offering digital talk radio. “Frankly, I think Pandora is going to have a really hard time making a go of it,” he said. Pandora’s users have been trained to click a channel category and listen to music without much input on their end — finding specific talk radio shows is a completely different behavior.

Lakamp tells me that Clear Channel has been working on iHeartRadio Talk for the past nine months. And even though it doesn’t feature ads at the moment, the company is working on introducing pre-roll ads eventually.