Earth Starter is raising a Kickstarter campaign to fix our broken food system. The company creates ‘Nourishmats‘ that make it easy for anyone living in an urban area to grow their own vegetables and herbs.

More than one-third of adults and 17% of children and adolescents are overweight and obese in the U.S. At the same time, the U.S. Department of Agriculture estimates that 16.7 million children live in “food insecure households” and 1 in 6 Americans face hunger. Earth Starter’s founders Phil Weiner and John Gorby founded the company to address these issues.

They met at the University of Maryland while studying economics and environmental science, respectively. The two shared concern over the precarious state of the world’s food system and America’s increasingly unhealthy population. Both saw urban gardening as a solution to what has become a serious environmental, economic, and social problem.

“I remember being in class and running the numbers through econometric models that were made by brilliant PhDs in agriculture and economics,” Weiner said in an interview with VentureBeat. “I don’t want to sound too doomsday, but we are using fertilizer at such an alarming rate that there will be mass famine if we keep this up. Right now we have enough food on Earth to give everyone 2700 calories per day and 75 grams of protein. The issue is distribution.”

Weiner said another issue is that farmers are becoming fewer and farther between. Too few people are growing fruits and vegetables, which drives up the prices. This impacts lower-income families who can’t afford fresh produce, and buy cheaper, processed, less nutritious food instead. Eating an unhealthy diet leads to other health issues, like diabetes and heart disease, and cuts down on energy levels, productivity, and cognitive performance. 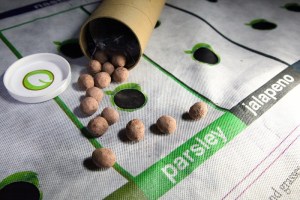 The goal of the Nourishmat garden is to empower people to grow their own vegetables. The mat is 4 x 6 feet and can come with a built-in irrigation system. The mats are made with breathable fabric and have small holes to plant “seedballs.” The seedballs are little bundles of seeds, clay, and compost which the company said give the plants a better chance of success. The mats come labeled with what seeds to put where and a planting guide on when to plant.

Weiner and Gorby spent years developing the “82 magical seedballs” and experimenting with the most effective layout for the mats. They wanted a product that would work all over the world at different times of year, and conducted a 300 person test in 5 time zones to collect data on the strongest, most adaptable plants. It is designed for people with no gardening expertise who want to put in minimal time and effort. (The mat won Dwell’s Design Materials Award.)

“So much food never makes it to the table or gets thrown away, and a huge amount of food goes towards feeding livestock,” Weiner said. “We wanted to figure out how to provide access to to healthy food given limited resources, like time and space. We want to cultivate gardeners, not gardens, and get people used to the idea that they can actually do this. It’s about transitioning from a culture of consumer to producer so they can live a healthier lifestyle.”

The urban farming movement has taken off because it mediates so many problems — the cost of healthy food goes down, as well as the environmental impact of mass farming and a far-reaching supply chain. Kickstarter and Indiegogo have slates of urban farming projects with a range of approaches to empowering home farmers. Earth Starter’s focused is eliminating as much of the friction as possible from home gardening, which Weiner said the seedballs are instrumental in accomplishing. 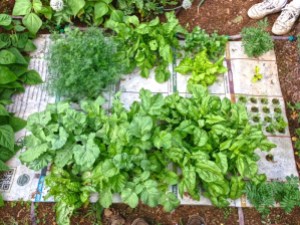 Plants include tomato, eggplant, radish, red pepper, carrot, onion, kale, spinach, jalapeño peppers, and basil. The mats can either be laid on soil, or in boxes filled with soil on a balcony or fire escape. The Herbmat option comes with 32 seedballs for 8 different herb varieties and is 2 x 6 feet. The mats are manufactured in North Carolina, and the Kickstarter campaign will help Earth Starter get the product out of beta testing and into mainstream society. Non-irrigated Herbmat kits costs $55, and Nourishmats cost $89 on Kickstarter, and the team said the price will go down once they have more orders. They are raising $70,000. For every Nourishmat purchased, the company will donate 4 meals to a hungry child through the Two Degrees Food organization.

Earth Starter is based in San Francisco and is participating in the Tumml “urban ventures” accelerator program, which works with entrepreneurs solving urban problems.