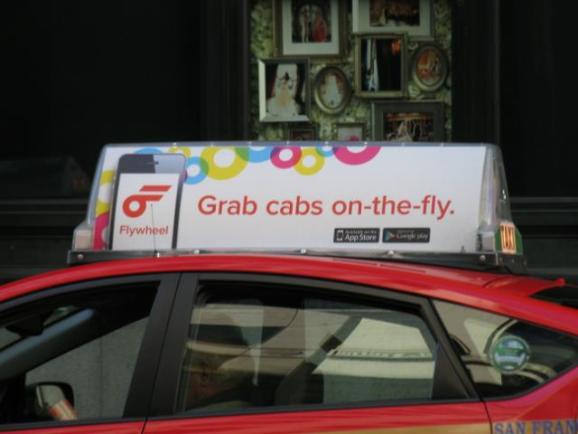 Today Flywheel announced closing $14.8 million in its second round of funding to change the taxi industry from within. Flywheel builds technology to modernize the way cabs operate. The app lets passengers hail and pay for cabs from their smartphones and rate drivers, giving traditional taxis the same benefits and conveniences as controversial ridesharing startups like Uber, Lyft, and Sidecar.

“Most city dwellers want to get fast, reliable, and safe rides to wherever they are going,” said CEO Steve Humphreys in an interview with VentureBeat. “Ninety-nine percent of all paid-rides in the U.S. still go through taxis, but they can be difficult from a reliability and ease-of-payment standpoint. Our vision is to create a more consistently reliable, convenient, and cost-effective paid-ride experience anywhere. We believe the technical and consumer improvements engendered by the Flywheel app are critical to urban progress.”

Flywheel is one of the only transportation startups supported by the taxi industry. Cab drivers, companies, and associations have come out strongly against ridesharing apps (like Lyft, Sidecar, and Uber), claiming they are illegal and pose a threat to public safety and taxi drivers’ livelihoods. Yesterday during a protest at City Hall, drivers from around San Francisco said they are not opposed to innovation, but advocate companies that bring business to cab drivers rather than take it away, like Flywheel.

“Illegal taxis and services must be stopped,” one speaker said at the protest. “We are highly regulated, trained, legally insured, and we drive regularly inspected vehicles — for a reason. We are against the buzzword ‘rideshare.’ Those unlicensed drivers are road bandits. We are the real community drivers.”

These ridesharing startups have fought repeated battles around the country to stay in existence. Last year the California Public Utilities Commission issued cease and desist letters and $20,000 fines to these companies, but then suspended these measures pending a re-examination of existing regulations. Within hours of the protest ending yesterday, the CPUC came out with a proposed decision that allows ridesharing companies as long as they abide by a set of safety and insurance requirements.

“Paid transportation is going through major, tectonic shifts,” Humphreys said. “External disruptors like Uber are forcing change at every level by cutting out much of the infrastructure that has been built up over the past two centuries. Flywheel is leveraging technology to help taxi fleets and drivers ward off the threat by these ride-sharing companies and, more specifically, non-trained and regulated, community drivers. These drivers are not professionals, they are someone’s friend down the block.”

Flywheel has over 2,500 regulated taxi cabs in its fleet, and revenues have gone up fivefold since the beginning of 2013. The company is currently active in San Francisco and New York and has a list of dozens of fleets around the country waiting to join. It has also made major updates to its apps over the past few months.

This investment, led by Craton Equity Partners with participation from existing investors Rockport Capital and Shasta Ventures will fuel Flywheel’s U.S. expansion and increase its partnerships with fleets nationwide. This brings its total capital raised to $22.8 million. Lyft recently raised a hefty $60 million round of funding, and rumor has it that Uber is raising a $150 million to $200 million round, at an astonishing $3.5 billion valuation.

Flywheel was formerly known as Cabulous. It was founded in 2010 and is based in the Bay Area.