It’s only the beginning of August, but it already feels like summer is ending in New York City. That’s certainly true for DreamIt Ventures, which is capping off the season with a demo day for its summer class of NYC startups.

15 startups entered the three-month program in the middle of May, covering things like energy optimization in buildings, mobile game creation without any code, and technology that lets any physical object interact with touchscreens. In addition to the usual accelerator perks of office space and business advice, all of the companies also received $25,000.

DreamIt was founded six years ago in Philadelphia, making it one of the oldest startup accelerators around. So far it’s had 112 companies come through its programs, including Adapt.ly, Scvngr, and Parse.ly.

The pitch: Activates virtual storefronts on your phone based on your physical location.

Taking the mobile retail concept one step further, Miner uses geofencing technology to create mobile stores depending on where you’re standing. It also allows multiple retailers to put their wares in a single mobile storefront, which could be useful for places like baseball stadiums. Miner can also place mobile “treasures” anywhere in the world, which you’ll have to physically walk to to activate.

“Miner’s all about here, we answer the question what’s here for me in real-time, when you arrive and businesses and events,” said co-founder and CEO Keith Fiore.

The Pitch: An online community for lawyers to share resources, referrals and best practices.

After landing at a huge law firm right out of law school, WireLawyer’s co-founder and CEO Matthew Tollin ended up creating a small firm of his own. The big problem? Even though small and mid-sized law firms make up the majority in the U.S., they’re at a severe disadvantage when it comes to resources compared to big firms. WireLawyer gives those smaller firms a platform to connect and ultimately get more business together.

In its first month, WireLawyer has snagged 3,000 registered users who’ve made more than 20,000 connections. 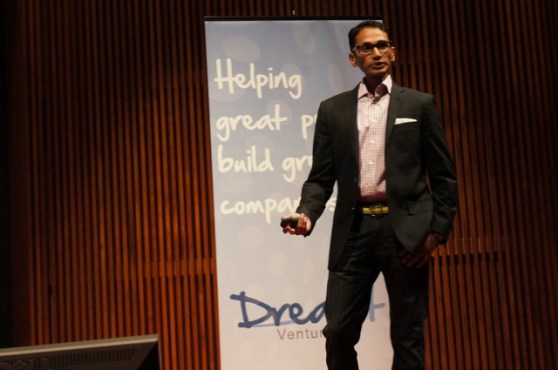 The pitch: An aggregation platform for the education space.

HeyKiki has built a “Kayak” for online classes. The company says there are around 50 million pages every month for classes and lessons, which means there’s a huge need for a decdent class aggregator.

So far, the company has more than 300,000 classes aggregated and saw more than 80,000 website visitors in the past month.

Mimoona aims to solve one of the biggest problems facing the fashion world today: Making expensive products nobody wants to buy. The company claims there’s a $36 billion opportunity in solving this problem.

Similar to crowdfunding sites like Kickstarter, Mimoona lets customers pre-order items from brands with a specific threshold.  If not enough people pre-order, the retailer simply won’t produce the item. The real key, of course, are the insights Mimooona can gather around that data.

The pitch: An e-learning platform to make and market videos.

With founders from the entertainment industry, CreatorUp wants to emphasize the importance of video content for small businesses with inexpensive production courses. The company is positioning itself as a cheaper option than hiring someone to produce videos for you (which can be expensive), and a simpler option than teaching yourself how to produce video on your own.

One of CreatorUp’s customers has already seen 1 million views for a single video, and the company has also partnered with YouTube, Office Depot, and others.

The pitch: A network for non-profits to connect with socially responsible businesses.

Perkle is basically reinventing the coupon book fundraiser for the modern age. It aims to let consumers donate money whenever you shop at stores you love. The company has been live for three weeks and has 50 major non-profit organizations signed up.

Perkle offers donation websites, widgets, and browser extensions that can be used to connect retailers with charity organizaitons. Organizations can sign up for free (where Perkle will take a cut from purchases), or subscribe to a premium plan for access to more tools and analytics.

The pitch: Lets you create mobile games on the iPad without know any code.

Like a MineCraft for creating mobile games, GamePress is an iPad app that makes it easier for anyone to create games. It offers a  simple creation process and the ability to send your games straight to the App Store once you’re done.

The company says one user’s 8 year old child was able to create a game in 30 minutes. GamePress charges for its app, but it also makes money by offering additional game creation content for an extra charge.

The pitch: Shows you fashion you love in stores around you, with real-time inventory.

Funding: Will be fundraising this fall.

Stylr aims to combine the best of online shopping with real-world stores. Its apps let you locate items you’d love directly around you. So instead of searching for items online and waiting for them to get shipped, you can search online and just walk over to a store. Stylr can also prove it generates foot traffic to stores.

The company soft-launched a few months ago and has been featured in the iTunes App Store for more than a month.

TouchBase has developed a technology using conductive ink that lets any object convey information when placed against a touchscreen. The company’s algorithm generates unique touchscreen IDs, which it claims is cheaper than implementing NFC and more secure than QR codes. (Check out our full coverage of TouchBase here.)

Callida has developed learning software that makes it easy for building managers to predict and easily optimize energy demand for buildings. Think of it like the benefits of Nest’s smart thermostat for entire buildings.

Today it’s difficult for managers to truly optimize energy usage, since climate systems often require experts to tweak. By offering predictive data and an easy to use online interface, Callida could lead to huge energy savings.

Trippin’In uses social activity on the web to determine the popularity of local businesses. The company says it offers more relevant insight than review sites like Yelp since it’s paying attention to plenty more data. It’s also signed a deal with telecom giant SingTel in Singapore to offer suggestions to their customers.

“I believe we’ll disrupt local recommendations as we know it,” said co-founder and chief executive Jack Yulzari. “Our technology can be used for a lot of other things… Business intelligence, hotel booking, mobile advertising.”

The pitch: An adaptive learning platform that prepares job seekers for modern jobs.

Hoping to solve two problems at once, TradeUp’s training platform lets employees bone up on new skills, while also developing profiles that make it easy for companies to hire them. The company claims it’s bridging the $91 billion e-learning market with the $142 billion recruiting industry.

TradeUp points out that we’ll need more trained employees than universities will be graduating within the next few years, so we’ll soon have to rely even more on online training services. 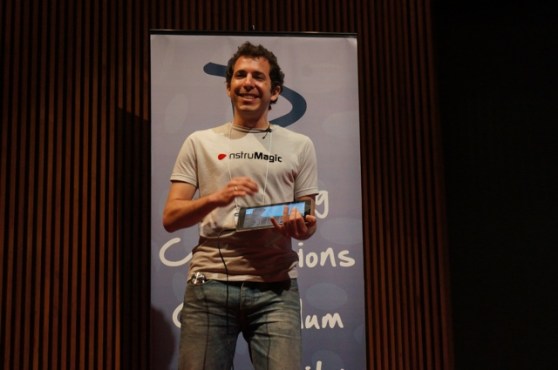 Like a slightly more advanced version of Guitar Hero (that may actually teach people a thing or two about music), Instrumagic has developed apps that let you easily play popular songs on guitar. The company has released three apps so far, and its 25,000 users have played more than 350,000 songs.

On stage today, chief executive Eyal Eldar led the crowd in an InstruMagic rendition of “Hey Jude” strummed from his iPad. It didn’t sound anywhere close to a real instrument, but the crowd still got into it.

The pitch: Offers an online platform and concierge service for managing your home.

Home ownership may be the American dream, but actually taking care of a large home can be more like a nightmare. Serviceful has created a platform to unify all of the services you’d need to take care of your home, from repair services to dogsitters.

In addition to a site that manages all of your house’s services, you also get a personal concierge who makes sure everything is properly booked. Serviceful starts at $100 a month, and it also includes 35 services and repairs that would typically cost you more than $3,000.

The pitch: Lets non-profits empower people to fundraise on their behalf anywhere.

The days of non-profit fundraising on the street and through direct mail campaigns are over: WeDidIt modernizes the fundraising process with an extensive donation platform online and on mobile devices. Now anyone can fundraise for a cause right from their smartphone.

WeDidIt charges a subscription fee for non-profits, plus it also takes a small cut from every donation. But since it also leads to dramatically higher donations for its customers, they likely won’t mind.