Earlier this summer, Evernote chief executive Phil Libin received an e-mail that caught him completely off guard. Sitting at the top of his inbox was an invitation to join the board of San Francisco’s near century-old San Francisco Opera.

His first reaction was to laugh.

“It seemed so out of left field, but then I thought, ‘This is so crazy that it just might work,'” Libin recalls.

This kind of “left field” entrepreneurial thinking has served Libin well. Evernote, his digital note-taking application, has raised over $250 million in venture financing in its five-year run and is a shoe-in for an eventual initial public offering. Libin has come a long way from the Bronx, where he was raised by Russian parents, who are coincidentally both classically trained musicians — though Libin himself is not an opera aficionado.

Still unsure that the e-mail was genuine, Libin shot off a response. To his surprise, he was immediately put in touch with Jennifer Lynch, the Opera’s industrious and creative-thinking development director. Lynch took Libin out for coffee to ask for his ideas and share recent changes in the Opera’s budget and marketing plan.

Lynch, who is married to a startup executive, hopes to turn the Opera’s fortunes around by broadening its appeal with a younger demographic. By phone, she describes the Opera’s target market as “the next generation of technology leaders.” More specifically, she’s targeting the future donors and season ticket-holders who will keep the Opera alive.

“In the past, we had support from the local venture community; big leaders like Pitch Johnson [founder of venture firm Draper and Johnson]. For years, they have been trying to encourage us to more actively reach out to the tech superstars coming up behind them,” says Lynch.

The Opera is standing at an ‘economic precipice’

That Libin was selected to join the board was no mistake; he was painstakingly vetted by a recruiting firm hired by Lynch to track down young technologists with a penchant for the arts. The firm handpicked Libin, along with six others, for a rather vague-sounding “task force” with the mandate to develop “groundbreaking new initiatives,” according to a media statement. All seven are joining the Opera’s board.

These new appointments to the board come at a pivotal time in the Opera’s history. Founded in 1924, it caters to roughly 810,000 San Francisco citizens — a mere fraction of the population in urban sprawls like Chicago or New York. 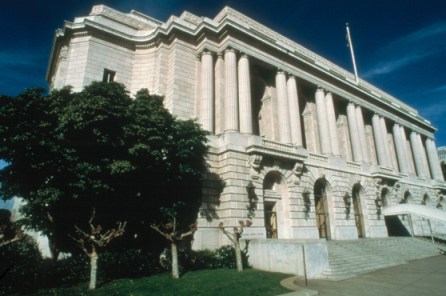 David Gockley, the general director who renewed his five-year term in 2011, has made no secret of the Opera’s troubles. He warned opera-goers in a surprisingly candid series of essays, featured in the 2011 program book, that the Opera is standing at an “economic precipice.”

“Half of our annual gifts are made by just 11 individuals who are over 65 years old,” he told a reporter at the San Francisco Chronicle, which is itself, coincidentally, another of the city’s struggling institutions.

Over the previous decade, the Opera has pared down down its productions for each season, echoing a nationwide trend. This year, it reduced the number from nine productions to eight, but it kept up the same number of performances to prevent ticket sales from further dwindling. It’s a necessary step for a financially beleaguered institution suffering from reduced attendance year after year.

One of the Opera’s most profound challenges is its size. Most San Franciscans don’t realize that the Opera, nestled firmly in the heart of town, is the second largest opera company in the country. The War Memorial Opera House, its physical home, is also one of the country’s biggest opera houses. A planned expansion for 2015 may put the company in financial dire straits, and the Board will need to come up with a strategy to fill a new, smaller theater with 300 seats in addition to its main theater.

The institution leans heavily on its sponsors and board members, most of whom made their money in the city’s dominant industry: technology. The problem for the Opera is that the new generation of technology industry giants haven’t followed in the footsteps of the last generation.

“We have a series of business-model problems — not just us, but every performing arts company in America,” says Lynch, who tells me that she’s now spending so much time with tech folk that she’s now using jargon like “user experience.”

“I’m fascinated to see how these these business leaders from Silicon Valley will try to solve these problems.”

Aside from Libin, newer members of the Opera board include William M. Coughran, Jr., a partner with Sequoia Capital; Peter Fenton, a general partner at Benchmark Capital, Ben Nelson, the founder of the Minerva Project, an ambitious plan to create a “virtual Harvard“; Gil Penchina, an investor; and Karthik Rau, the CEO of a stealth startup called SignalFuse.

Another recent addition is Karen Richardson, a keen opera-goer who got more involved with the board after selling her company, Epiphany, for $329 million. Richardson is optimistic about the board’s chances for success. She joined the board to “give something back” to the city she calls home after spending the majority of her professional career in Silicon Valley.

“It wasn’t always the case that tech people were based in San Francisco; most were down in Silicon Valley and didn’t often make the trip up,” Richardson explains. “But with this mass exodus of startups to the city, we are in a unique position.”

These startup founders and investors have all proven they can build revenue-generating companies from thin air. Can they save the Opera once and for all? 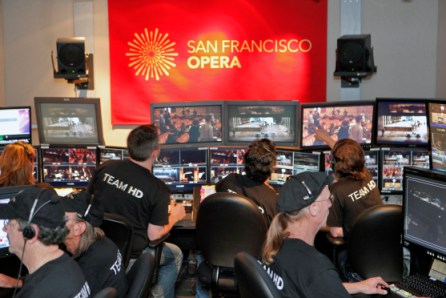 Above: Inside the Opera’s full multimedia production suite, “Koret”

Tablet apps, live HD and other ideas to stay relevant

The additions to the board are still new, but they’re already generating ideas for yet more digital assets. For instance, Libin’s immediate goal is to develop a series of smartphone and tablet apps, since anyone can watch live performances in HD on the S.F. Opera’s website.

These multimedia capabilities put every other Opera house in the world to shame and yet they aren’t being fully utilized, says Lynch.

Richardson believes that Opera has a more fundamental PR problem, which can be rectified through social media and other forms of outreach. Many people still associate the classical art form with those epic five-hour long, German-language Wagner productions, which take place over a period of several days. That would be a huge time commitment.

However, due in part to tech’s influence, the Opera’s programming is among the most experimental in the country. It’s an amalgam of traditional favorites like Puccini’s “La Rondine” or Georges Bizet’s “Carmen” and dizzying, all-digital screenings of more contemporary productions.

Despite these efforts, most young tech entrepreneurs agree that the Opera doesn’t speak their language. Anand Dass, founder of venture-funded startup Ink Mobility, told me the only time the Opera enters his consciousness is when he is driving back from work, and spots the “grandeur of the hall.” When he’s considering making plans for Saturday night, he’ll check events nearby on Google Now or peruse his friends’ Facebook timelines.

“Cognitively it doesn’t feel like there is a lot happening at the Opera,” says Dass, who is exactly the kind of person the company is trying to reach. “Because if they were, then it would show up in aggregation sites like Living Social [and] it never pops us on my Facebook feed either.”

At the new 300-seat theater, the board says it will have further opportunities to experiment with ambitious programming and market to this target audience, perhaps even putting a few ideas to a vote on the various social media sites.

Some of these changes will be underway in the coming months. Both Libin and Richardson stress that they agreed to join the board as long as their ideas are heard and they can prove useful.

For his part, Libin plans to apply some of the lessons he learned from growing Evernote from nothing into a 300-person company with a 100-year-plan.

“I’m treating the opera like a 90-year-old startup, and I see similarities with what we’re doing at Evernote,” he says. “I’m not saying we’ll take design cues from the Opera, but the meta idea is the same. How do we create an enduring experience?”

Libin’s analogy makes some sense. Like the Opera, Libin’s vision for Evernote combines aspects of the old world and the new. In the past year, Evernote formed partnerships with a handful of emerging business software companies as well as the maker of old-school paper notebooks, Moleskine.

But when I tell him that comparison between the Evernote app and the Opera seems a bit far-fetched, Libin responds by pointing out that his team deliberately designed an “anti-social” experience. Evernote customers aren’t hyper-connected, easily distracted, and glued to a social media stream. The Evernote addict is more of an introspective type, a chronicler of sorts, a prolific doodler on the subway. She’s the type of person who might even enjoy a trip to the Opera.

And despite that “anti-social” approach, the app’s customer base has grown to over 60 million people, Libin says.

Before we wrap up, I ask Libin to reveal his bold plan to grow the Opera’s base of loyal customers, particularly among the tech sector.

“Star Wars: The Opera,” he immediately hits back, giggling at the idea, and then pauses for a few moments of reflection. “No seriously, that’s actually not a bad idea.

“If that won’t get San Franciscans rushing to the Opera, I don’t know what will.”