MALMÖ, Sweden — Spotify director of economic development Will Page released some interesting data today that sheds light on what happens when a song becomes a global hit.

The music industry has always had some standards for what constitutes a big hit — catchiness, appeal to the youth, sex appeal, etc. — but it hasn’t had hard data that could predict a winning song. And now that services like Spotify are mixing up the ways people are finding and enjoying new music, hits are getting harder to predict. 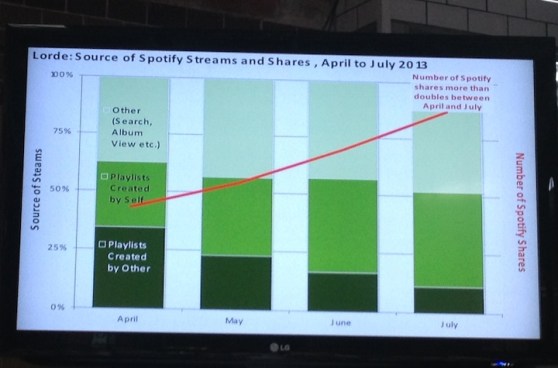 Above: Slide from Spotify’s Will Page’s presentation at the Media Evolution event in Sweden.

Using the recent example of the hit single “Royals” from New Zealand singer Ella Yelich-O’Connor (aka Lorde), Page explained that sharing on Spotify was pretty evenly distributed between people adding the song to playlists, listening to the song on other people’s playlists, and finding it via Spotify organically (via search). However, when Spotify’s Sean Parker added Royals to his “Hipster International” playlist back in April, the song went super nova — grabbing a significant increase in listener activity over the next 24 hours and pushing her to the second most popular song on Spotify two weeks later.

“The important observation here is that, yes, the song broke through from a playlist, but once that happened, sharing kicked in, and people began discovering it on their own,” Page said during a panel discussion about the evolution of digital media distribution at the Media Evolution event in Sweden.

Parker is someone in the public eye, which helped push Lorde’s song into the mainstream. But the moral here isn’t to get noticed by Parker. Any action that pushes a song into the mainstream view would have the same effect. I certainly didn’t realize that he was the reason I ended up hearing the song on the radio in Austin, Texas days ago. 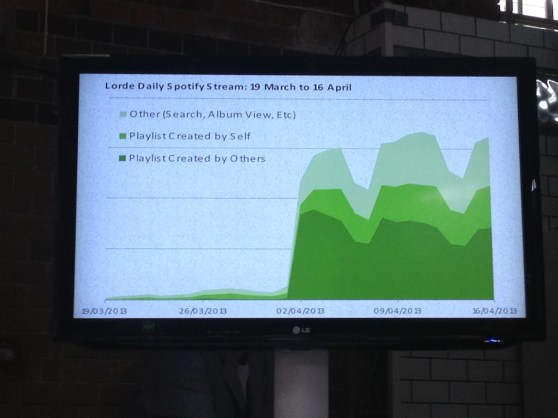 Page said Lorde’s song saw a major shift in how it was being discovered in the aftermath of gaining attention from Parker. People were more likely to listen to Royals by adding it to their own playlist or by searching for it on Spotify. That means people really only needed to hear a piece of the song once or twice, and then went looking for it themselves.

Page’s data shows that Spotify is actively pushing people to legitimate options (rather than piracy) for finding and listening to new music. It also suggests that Spotify is actively helping to diversify hit songs across the board. For instance, last week Lorde reached the top 10 on Billboard’s Alternative music chart — the first time a female lead musician has done so in 17 years. 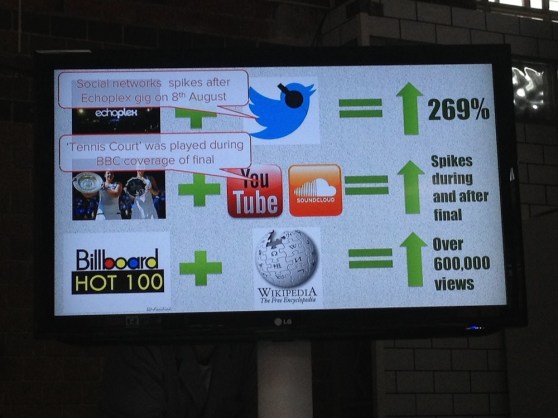 I went ahead and embedded Lorde’s song Royals below, but I can’t take responsibility for it staying in your head for the rest of the day.