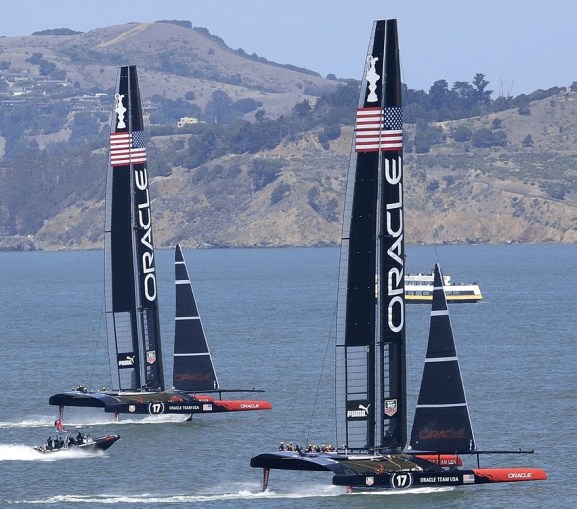 America’s Cup is coming up this weekend. The finals of this highly competitive and elite race are taking place in the San Francisco Bay, and sailors, sponsors, and spectators will battle it out for victory (and the best viewing spots). Like most big events in San Francisco, there is some sort of a gossipy tech angle. Three members of Larry Ellison’s Oracle Team USA yacht have been excluded from the race and fined $250,000. The team was hit with a two-point deduction. Looks like Oracle, in the water just as in the market, is subject to criticism.

Zuora gets $50M more to take on Oracle & SAP

Zuora raised $50 million today to market its technology to businesses around the world. Zuora provides the infrastructure to help businesses move from sales of products to subscription commerce and billing. The best example of this is enterprise software as a service. Zuora’s fifth round of financing was led by Next World Capital and Vulcan Capital, with participation from Northgate Capital and existing investors Benchmark Capital, Greylock Partners, Redpoint Ventures, Shasta Ventures, and Tenaya Capital. Read more on VentureBeat.

HotelTonight raises $45M to spread same-day booking around the world

HotelTonight has raised $45 million to fuel international growth of its same-day hotel booking app. Technology hedge fund Coatue Management led this round. GGV Capital also participated along with existing investors Battery Ventures, Accel Partners, U.S. Venture Partners, and First Round Capital. With this fourth round of financing, HotelTonight has eyes on Eastern and Northern Europe, Asia, and Latin America as well as plans to deepen its footprint in existing markets. This brings the total capital raised to $80.85 million. Read more on VentureBeat.

Hearsay Social, the startup that helps sales people avoid those dreaded cold calls, just raised $30 million in its third round of funding. Hearsay Social is best known for pioneering the concept of “social selling.” The company provides a suite of software for sales representatives with capabilities like scheduling alerts, and libraries of publishable content. The company raised its funding from its existing investors, Sequoia Capital and NEA and has raised $51 million to date. Read more on VentureBeat.

Whisper has closed $21 million to let you share your secrets via its mobile apps. Whisperers add text to images and post it anonymously to the site. You can either upload your own photo or find one within the app. Social features let users see popular, latest, and nearby whispers, and post them to other social networks. The company is growing fast and raised this financing to help scale. Sequoia led this round, with participation from existing investors Lightspeed Venture Partners and Trinity Ventures. Read more on VentureBeat.

Dissolve raises $5M to be the Shutterstock of video

Dissolve launched today with $5 million in funding. Dissolve powers a stock-video marketplace that sells HD video clips for $5, which is significantly less than many competitors. Cofounders contributed to this funding, with participation from iNovia Capital.

Boticca has raised $4 million for its accessories-only marketplace. The company sources jewelry and accessories from around the world with a focus on unique products and brands. It offers more than 10,000 products from 40 countries on e very content. UK-based MMC Ventures and angel investors around he world contributed to this round. It follows a $2.3 million seed round from June 2011.

Stanford’s StartX program received a $3.6 million grant and announced the formation of the StartX Fund, which will support Stanford entrepreneurs as they develop ideas and bring products to market. StartX is a nonprofit startup accelerator for student entrepreneurs. This grant arises from a partnership between Stanford University, Stanford Hospital & Clinics (SHC), and StartX. It will pay StartX $1.2 million in grant money each year, over the course of three years, to grow its operations. Read more on VentureBeat.

AdYapper scoops up $1.2M to tell you if ads are actually seen

ZappRx gets $1M for its e-prescription app

ZappRx just launched its mobile application that makes it easier for anyone to pickup a prescription at the pharmacy. It’s like a “mobile boarding pass” for the pharmacy that helps speed up the experience and reduces the risk that pharmacists would dole out the wrong prescription or dose. The funding comes from Atlas Ventures Jean-Francois Formela and Ryan Moore, along with Life Sciences Angel Network, Hakan Satiroglu, among others. Read more on VentureBeat. https://venturebeat.com/2013/09/05/zapprx-gets-1m-for-its-e-prescription-app/

Piccing has raised $1 million for its social image sharing platform. The South Africa-based company lets users post pictures of things that inspire them, along the lines of Pinterest. It has 1.2 million visitors a month. This round was led by undisclosed investors.

Barcelona-based Typeform has raised $721,660 (€550,000) in its seed round, which was led by Berlin firm Point Nine Capital with participation from Warsaw’s RTAventures. Typeform first launched its beta in April 2013, the service lets you create and participate in surveys and polls in a user-friendly interface that’s tailored to touchscreens. The service works well on phones, tablets, and web browsers, the team says.