KAWO is helping brands overcome the Great Firewall of China.

Facebook, Twitter, and YouTube are banned in China. Companies without significant marketing budgets and resources struggle to reach the country’s 591 million Internet users as a result.

China has the world’s largest Internet population and they are actively engaged on social media. McKinsey conducted a survey which found that social media has a greater influence on purchasing decisions for consumers in China than for those anywhere else in the world. They are more likely to consider buying a product if they see it mentioned on a social media site, and Chinese consumers are expected to spend $265 billion on e-commerce in 2013.

This present a huge and largely inaccessible opportunity for brands.

KAWO aims to open China up by providing tools for building a Chinese fan base and creating a stronger channel for communication. 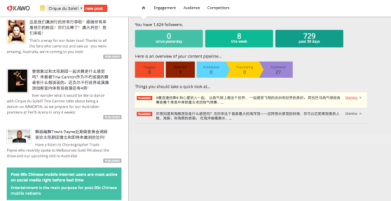 Brands can monitor all the activity and deliver China-specific posts, promotions, and communication from a dashboard.

KAWO’s software also checks Facebook and Twitter posts for potentially sensitive language and makes sure there are no red flags, or that it doesn’t step on any “locally sensitive toes.”

In addition to these publishing tools, KAWO also offers analytics to help brands learn more about their fan demographics, activity, engagement, and key influencers. It also gives companies insight into their competitors and the chance to solicit feedback from locals.

KAWO has received $500,000 in funding from parent company the Mailman Group, a social media and digital advertising company based in China. Mailman Group formed a fund late last year to invest in Chinese startups. Mailman was founded in 2007 and has extensive expertise on the Chinese Internet market, as well strong connections with brands.