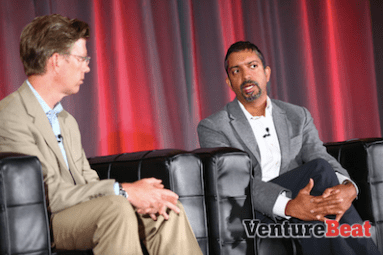 Today, Ford is kicking off a partnership with VentureBeat to highlight some of the many ways that developers can work to create the “Internet of Things.”

We caught up with Michelle Moody, the cross-vehicle marketing manager for Ford, to find out why the car company is working with VentureBeat. Moody manages marketing of Ford’s connected technologies, including SYNC.

“We think it’s a great venue to reinforce the commitment that we have to customer-focused technologies,” Moody tells us. “In particular, our Ford Developer Program is a great fit in your environment.”

“Your venues allow us to reach out to key constituencies,” Moody says — specifically, “a wide variety of app developers who want to develop apps that can be safely used while inside a vehicle.”

Developers have already created many apps that work in cars to provide what Ford calls “audible entertainment,” such as Pandora for music streaming. But that’s just scratching the surface, Moody says.

“I think that there are many more opportunities in what I call ‘wayfinding'” — not just navigation, but finding/learning about locations you’re interested in,” she says.

Cars are a key component of the Internet of Things, but they’re just part of a whole web of connections, including wearable tech like fitness watches and Google Glass as well as the cloud-based services needed to support those devices.

The combination of ubiquitous mobile devices and cloud-based services will also generate vast amounts of data, which can in turn be used to improve the efficiency of the way we use things.

For instance, parking apps in your car might be able to make use of traffic and parking-availability data so you can find a spot faster, without having to circle around block after block. That will not only cut the time you spend in a frustrating commuting task but will also reduce gas consumption and trim the emission of pollutants and carbon dioxide.

“Clearly more car companies will have to implement platforms that allow for the use of data safely, through applications,” Moody says. Even for that simple parking app, Moody said, maintaining a whole data store is a pretty daunting task. With large car companies like Ford providing the backend, and smaller companies supplying apps and other cloud services, we could see a diverse, multilevel software ecosystem emerge that’s very similar to the way car manufacturing already works.

Ford doesn’t know exactly where the future lies, but by taking part in MobileBeat and DevBeat, it sees a way to make connections with the developers who are helping build that future.

“We might not be 100 percent of the solution, but we want to be part of the discussion,” Moody says.

“I’m sure there will be things in the future that we aren’t even thinking about today,” she adds. Ford wants to help those things happen.