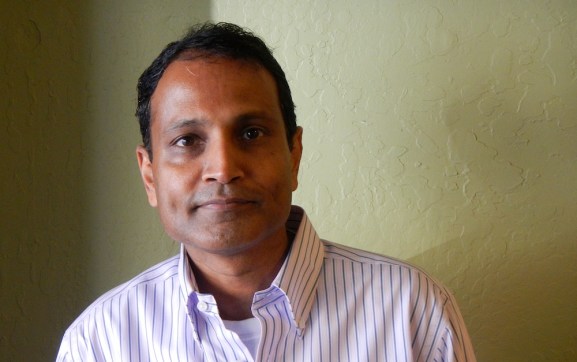 Vineet Jain, the CEO of Egnyte, is prepping the company for a successful exit.

Vineet Jain came to America with just $100 in his pocket — literally.

He laughs as he remembers arriving in the San Francisco airport in 1993.

Now, he’s running rapidly growing hybrid cloud company Egnyte — his second startup — and living the Silicon Valley dream. He is looking to buy a house somewhere on the San Francisco peninsula, planning for his company’s next funding round, and looking at schools for his almost kindergarten-age son.

Most importantly, he’s focused on taking Egnyte to an exit that will create wealth not only for him but for all of his employees (175 and counting) as well as his investors.

Egnyte is an interesting company, because its hybrid technology appeals to IT managers who are attracted to the flexibility of cloud storage solutions but are spooked about entrusting their company’s most intimate secrets to an outside party. As such, Egnyte offers a level of control and flexibility unmatched by most cloud providers. But as I got to know Jain through a few recent conversations, I realized his own journey as an entrepreneur is interesting in its own right.

Editor’s note: Jain will be speaking at our CloudBeat conference on Monday & Tuesday in San Francisco, where we’ll focus on topics such as the hybrid cloud and how things like collaboration, storage, and other functions are all moving to the cloud. Register today!

For Jain, a successful exit is a deeply personal mission. Now in his mid forties, he is haunted by what he calls the “failure” of his previous startup, Valdero. But more importantly, he is driven by the memory of his father.

Above: Vineet Jain as a 5-year-old.

Jain’s father ran a successful iron and steel wholesale company in India, boosting Jain’s family into the uppermost echelons of society. As a young student, Jain went to a private school, the Modern School Barakhamba Road, along with the children of government ministers. But a series of poor business decisions sent his father’s company into a sudden decline and greatly reduced the family’s wealth. The family scrimped to keep Jain in the private school, but their lifestyle was diminished in other ways. Jain remembers asking to be dropped off several blocks from the school because his father didn’t even have a car — he took young Vineet to school on a two-wheeled scooter.

It’s clear he doesn’t want that kind of reversal to happen to his son — or his employees.

When Jain arrived in America, he wasn’t completely without means. A graduate of the Delhi College of Engineering, Jain had come to the U.S. with a job offer in hand from Bechtel. He took a modest room, arranged for him by the company, in a seedy hotel a few blocks from the company’s downtown San Francisco office.

After a year, he left Bechtel and took a job at KPMG, where he worked as a consultant for several years, rapidly rising through the ranks and pulling down an increasingly large salary.

He had little more than a PowerPoint deck outlining his plans plus a consulting contract to help seed the venture. That venture became Valdero, a company producing supply-chain management software to help companies manage their inventory.

Valdero had $7 million in revenue when One Network acquired it in 2005. The transaction made some money for Jain, but it wasn’t enough for an early retirement. More important for him, it didn’t result in a windfall for his employees.

One Network took the company’s customer list (including Motorola) and its technology. But most of the company’s 70 employees were laid off, and Jain himself left immediately.

After that, Jain did consulting work for a couple of years, advising other companies on product development around Oracle Applications. But in 2007, he and his core team from Valdero came up with the idea for a hybrid cloud storage company.

Together with former Valdero partners Amrit Jassal, Rajesh Ram, and Kris Lahiri, Jain started Egnyte in 2008. Jassal is now the CTO of Egnyte, Ram is now the company’s vice president of product management, and Lahiri is the vice president of operations and chief security officer. Steve Sutter, another former Valdero employee, later joined Egnyte as its chief financial officer.

Egnyte has raised $32 million in three funding rounds from Google Ventures, Kleiner Perkins Caufield & Byers, Floodgate Fund, and Polaris Venture Partners. Its most recent (series C) round was for $16 million, which closed in July 2012.

While bigger startups often overshadow it in the cloud storage sector — Dropbox and Box — Egnyte’s hybrid technology is finding traction with companies that are concerned about maintaining more control over their files. It enables companies to store files locally or in Egnyte’s cloud, with complete transparency to the end users: Employees don’t have to worry about where their files are; they can simply access them from wherever they are.

For IT managers, many of whom are becoming reluctant to use public cloud infrastructures that could be monitored by government agencies or subject to unpredictable downtime, Egnyte’s hybrid proposition is a resonant one. (Egnyte investor Mike Maples is a strong believer in hybrid cloud technology — see our recent interview with Maples on hybrid clouds.)

Egnyte hasn’t published revenue figures, but Jain says that its bookings grew almost 2.5-fold from 2011 to 2012 and are on track to nearly triple in 2013, to between $20 million and $50 million. Egnyte also recently announced that its partner revenue (revenue generated by partners who resell Egnyte’s services) has been tripling quarter over quarter. And Egnyte says that companies share over 1 billion files daily using its technology.

Jain tells me that the company will be looking to close its fourth round of funding soon, perhaps as early as the end of September. His goal is to raise another $25 million.

Jain appears to be the typical, successful immigrant entrepreneur. He sports an expensive watch, dresses well, and is the CEO of a company that is growing rapidly and provides a livelihood to nearly 200 people and their families. And Egnyte is hiring, as Jain’s personal LinkedIn profile declares.

But his ambitions are also balanced by a sense of purpose. If he becomes wealthy, Jain says, he already knows what he wants to do with his money: help provide medical care to people in India.

That’s because of his father.

Two years after Jain left for America, his father suffered a stroke. Despite the family’s relative wealth, the Jain family lived in a small town outside New Delhi — a place with no hospital.

The ambulance drove his father to a hospital in Delhi, a trip that took five hours. By the time they got there, his father had died.

As Jain tells me this story, he chokes up, almost starting to cry.

“I don’t want anyone to have to go through that again,” he says.

To that end, he tells me, he plans to donate 60 percent of his wealth to medical services.

His father, Jain says, was a collector of fancy fountain pens. But after he died, that collection of pens did nothing — it just sat there. Jain wants to do more with his success than collect pens. For his own writing, Jain uses a paper notebook and a pencil.

That’s not to say he is completely avoiding the trappings of wealth. He shows me his watch: A $9,000 Rolex. But as soon as he tells me its value, he also says that he wears it for business purposes, not to show off.

“I wear this because people look at it, in meetings, and they assume I must be smart,” Jain says. “But I don’t care about the watch. My favorite watch is a $35 Timex.”

I’ve only ever seen him with the Rolex, however.

A clear and focused goal

Jain still talks to his mother every day — she lives in India and runs one of the factories in a flourishing business his family has built over the last 15 years (Ratan Textiles, employing 3,000 people). His wife is Indian, and the young family visits India often.

But he waxes eloquent about the country that is his second home. (He became a U.S. citizen about seven years ago.) It’s a combination of America’s openness to strangers and its capability to reward innovation and hard work that gets him excited.

“In America, you can be in an elevator with someone and you can have a meaningful conversation, even though you’ll never see them again,” Jain says. “If you are smart and you work hard, this country will reward you. This is the smartest country in the world.” 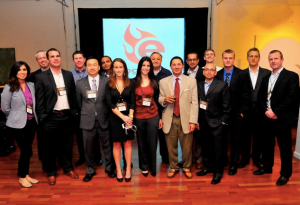 Above: The Egnyte management team in 2012.

The key being hard work. Jain clearly expects much out of his employees and executives, and he does not like to give praise to people simply for getting their jobs done. In his job, he’s all business.

While he’s not a touchy-feely manager, I’ve noticed in conversations that Jain has a keen awareness of what’s going on in his employees’ personal lives. For example, he told me with amazement about a recent employee who, despite being in his twenties, is supporting an extended family. When I asked him about a mutual friend who works in the industry, he made an insightful observation about that person’s personality.

But when one of his executives asked Jain to give a recent hire praise for getting up to speed quickly, he tells me that he refused. Why should he praise someone for doing their job? he told them.

In his private life, Jain remains focused on a singular goal: leading Egnyte to a successful exit that he can be proud of.

In fact, he tells me, Jain has a number in mind for that exit — a dollar figure that he wants Egnyte to be worth. Every morning, he wakes early, says his prayers (Jain is not just his last name: by religion, he is also a Jain), and then writes his number down on a notepad he keeps in his bedroom.

Every morning he writes the date, and next to it his goal. That goal is always the same number, day after day — although, Jain says, he’s revised it upward twice, as Egnyte has grown. To save paper, he fills each sheet with three columns before moving on to the next sheet.

And though he usually writes with a pencil, on this sheet, he uses a pen.

“So that it’s immutable,” he tells me.