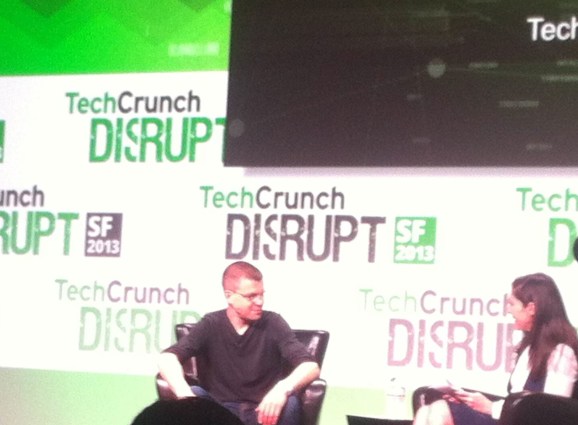 Today at TechCrunch Disrupt, the PayPal cofounder sat down with TechCrunch’s Alexia Tsotsis to talk about his career and what lies ahead.

“I am most proud of the legacy I haven’t built yet,” Levchin said. “Data is what its all about for me. I want to build things that significantly improves the lives of a large fraction of the population and can move the needle on big challenges.”

Levchin is a serial entrepreneur who also served as PayPal’s chief technology officer. He went on to found Slide, which sold to Google for $182 million, and joined Google as its vice president of engineering.

He is now a member of Yahoo’s board and is currently working on HVF, a startup that explores and fund projects and companies that are leveraging data. He recently launched a fertility app called Glow.

Seventeen percent to 18 percent of women seek medical help to get pregnant, and insurance does not cover infertility treatments. Levchin saw an opportunity to use big data technology to help couples conceive.

“Women have taken their rightful place in the workforce — higher education is more available and successful, and more women with C-level titles are waiting longer to try to get pregnant,” Levchin said. “You realize that while their position in society has greatly improved over the past couple decades, their ability to carry biologically has not. The smartest people, the people we want to have kids, are less likely to.”

Glow tracks a variety of vital signs, including your menstrual cycle, morning temperature, when you last had sex, the results of ovulation test or pregnancy tests, weight, stress level, and your cervical-mucus consistency, which is a big predictor of ovulation cycles. The app has built-in algorithms to predict your likely fertile times based on the data you enter, and it also aims to be a financial tool for would-be parents who might at some point need fertility treatments.

“It is an amazing life-changing experience to have a kid and I don’t think there is anything better I could possibly do,” Levchin said. “That’s my legacy, and not being able to have that is a giant blow to people’s self-perception, ego, and ability to define themselves in the later stage of their lives. Glow is really meant to help you conceive. It is a living, breathing thing designed for two people who want to have a child.”

Glow isn’t Levchin’s only project. He is also working on a payments company, is an active startup investor, and serves on multiple boards.

“I thought I was done with payments,” he said. “People who say everything in payments will be done by PayPal, Visa, or Mastercard have no idea what they are talking about. Payment industry has not innovated at its depth in fundamental ways for so long, it’s not even funny. Opportunities are so plentiful.”

Levchin also discussed his thoughts on the NSA. He said that he applied to the NSA to work on cryptography but could not join because he was not yet a citizen. This gave him a unique perspective on the intelligence community.

“To classify a body of government that is designed to protect us from evil, to figure out what might hit us next and prevent it, is thoughtless,” Levchin said. “These people are making $40,000 a year; it is not a path to wealth or a way to get recognized. The debate has gotten emotional, information-free, and belligerent for no reason, and affording them some respect is a good thing.”