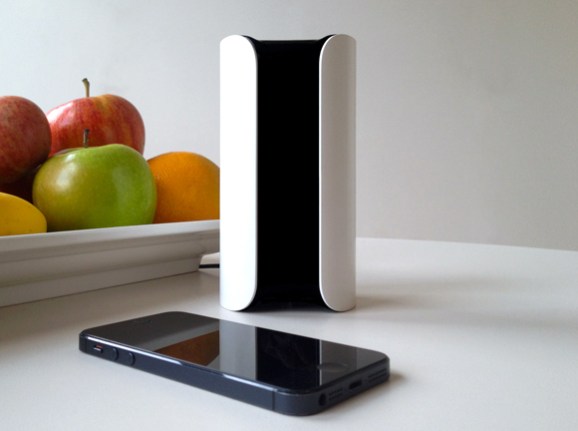 Canary is about the size of a soda can.

When Canary launched an Indiegogo campaign for its smart home security device last month, it set out to raise $100,000. Instead, it pulled in close to $2 million, making it Indiegogo’s most successful campaign ever.

For Canary CEO Adam Sager, the success of the campaign was proof that there is widespread interest in Canary’s entire value proposition: an accessible, powerful security device with an equally accessible service layer backing it up

“Since we founded the company over a year ago we knew that we were onto something special,” Sager told VentureBeat earlier this week.

That “device + service” model for hardware startups is very much in vogue now. As we’ve seen with companies like Dropcam, often hardware is only as successful as the software and services backing it up. Customers want the whole package — and so, too, do investors.

But pursuing the service model also means that, when Canary sells a device, it’s also creating a relationship with customers that will last long after that product is shipped. “When you’re building something that requires services on top of the product, it adds a trust element,” Sager said.

This, again, is what made Canary’s Indiegogo campaign different from most others: Canary isn’t just a one-off device — it is, from the outset, the basis for an entire company.

That’s where crowdfunding sites like Kickstarter and Indiegogo come in. When a hardware maker launches a new device on these platforms, the ensuing backer response is a good litmus test for how much popular interest there is for that product.

Scott Miller, the CEO of hardware-focused crowdfunding site Dragon Innovation, phrased it well in a recent interview with VentureBeat: “If you can convince people to open up their wallets before getting a product, that’s a pretty good indication you’re onto something.”

After raising nearly $200 million, it’s clear that Canary convinced a whole lot of people to open up their wallets. And if things go the way they should, you can also expect investors to do the same.