NEW YORK — We’re here at IAC’s headquarters for the first demo day from Kaplan’s EdTech Accelerator, which has the backing of startup accelerator powerhouse TechStars.

The three-month program, which ran from June to September, offered 10 education technology startups the typical accelerator fare: office space, mentors, and $20,000 in funding (from TechStars). The company also had access to the “Kaplan Way for Learning” program, which brings together science, technology, and instructional design to create learning-based products.

Andy Rosen, Kaplan’s chairman and CEO, kicked things off by discussing the legacy of his company’s founder, Stan Kaplan. “Everything that we think about education today stems in some measure from this man, and the notion of meritocracy that we think of as a core part how our higher-education system works, owes a lot to Stan Kaplan,” Rosen said.

“These companies are literally pulling us into the future of education,” said Don Burton, the program’s managing director at TechStars. He notes that they’re focused on three critical areas: Smarter learning experiences, smarter and invididualized pathways to learning, and smarter learning scorecards.

Burton also announced today that TechStars will extend this accelerator program with Kaplan for several more years. “We’re exploring other opportunities as well,” he said, which may hint at future partnerships with learning companies. 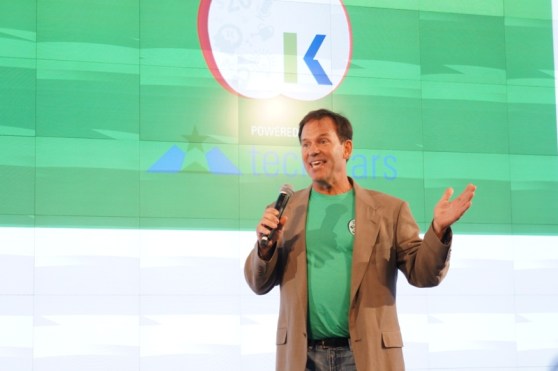 Most college students don’t have the necessary work experience to land decent jobs when they graduate. Flinja aims to solve that by offering training exclusively to college students and connecting them to companies looking for talent. CEO Victor Young points out that only 3 percent of LinkedIn’s users are between 18 and 24, and he hopes to fill that gap.

Flinja turns students into “freelance ninjas,” enabling them to accept jobs from companies like Xerox, Yelp, and Burger King as well as smaller startups. Young announced today that Flinja has more than 100,000 students signed up and more than 3,500 employers offering jobs. Over the past six months, Flinja has placed 2,200 jobs, typical work hours went from 10 hours to 20 hours, and job fulfillment time went down from two weeks to two days.

Newsela uses daily news to helps students become readers of nonfiction, but the real magic is that it offers personalization and data. The site grabs articles from top publishers and offers them at reading levels from grade three to adult. Reading levels are calculated automatically, but students can also increase their levels.

“Now students in the same class that are struggling, on track, and advanced can all read the same great nonfiction together,” said Newsela CEO Matthew Gross.

The company has won a grant from the Gates Foundation for next-generation literacy tools. In the past 12 weeks, it has grown to 3,742 schools with more than 120,000 poll questions asked. Newsela is seeing 11-times growth every day. 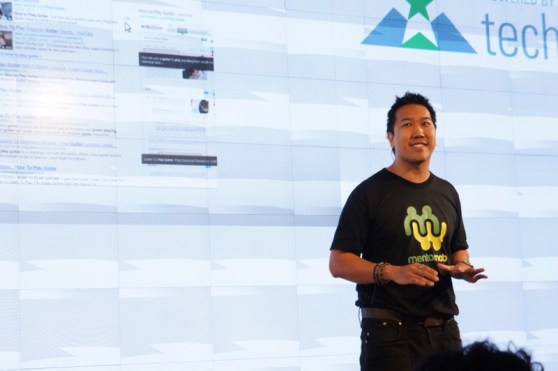 The pitch: Step-by-step learning through the internet’s best content, ordered by people like you.
Funding: Raising $1.2 million, have 60 percent committed.

Through a combination of experts and organizers, MentorMob finds the best of the web to help you learn skills and lifestyles. The company’s workers can create streamlined lessons for activities in just four weeks.

CEO Kris Chinorson claims it sports high engagement times of 24 minutes on average, and the site is growing 30 percent every week. MentorMob just reached 150,000 unique visitors, and it has partnerships with brands like Virgin Mobile and Microsoft Bizspark (when you’re learning something, you’re primed to become loyal for a brand). 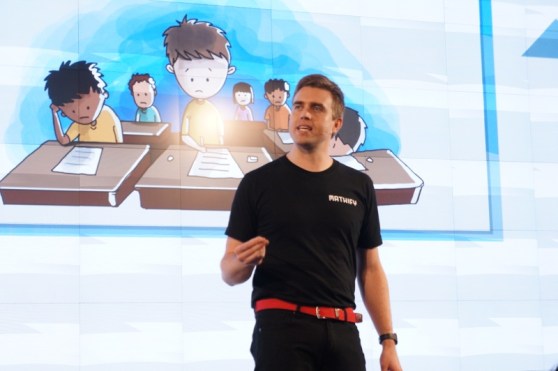 Its product Mathify aims to gamify math learning. For example, instead of giving students fraction thought problems, you can give them something that looks like Angry Birds to interact with. The company claims that an independent, controlled study shows their lessons help kids actually learn math.

PlayPower has won awards from The White House, Sesame Street, and the NYC Department of Education. CEO Derek Lomas says the company has received three letters of intent to use its service which will cover more than 2.5 million students.

David Cass, Uvize’s founder and CEO, aims to solve one of the most worrying education problems today: 88 percent of veterans who start college never graduate.

The company has developed a social network dedicated to connecting veterans at colleges, so they avoid the pitfall of feeling isolated on campus. Uvize also offers preparation material to help veterans acclimate to being in a learning environment after their experience in the field (many have gone around five years since being in school). It can also connect veterans with its larger network of students. 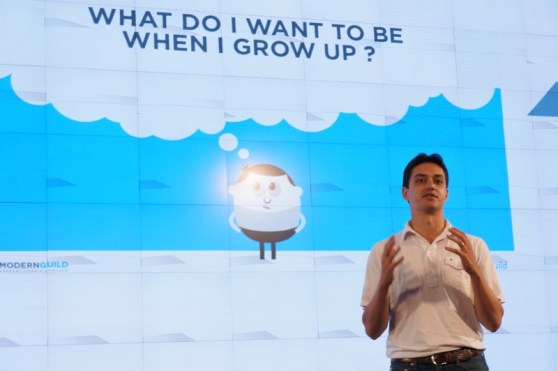 ModernGuild aims to answer the question every student has: What do I want to be when I grow up?

The company has developed an online and career mentoring service to help both high school and college students match their education path to their career path and ultimately give them some direction. ModernGuild CEO Adrian Fraise claims its graduates are twice as confident about their career prospects, see 92 percent job placement (for college subscribers), and typically refer the service to six of their friends.

Students pay $250 to $1,000 per course. Just two weeks into the current semester, it has seen more than $25,000 in revenue from a Boston College Campaign, and more than $30,000 from another college. ModernGuild has just landed a deal with the University of Michigan, which it expects will generate $1 million in revenue per semester. 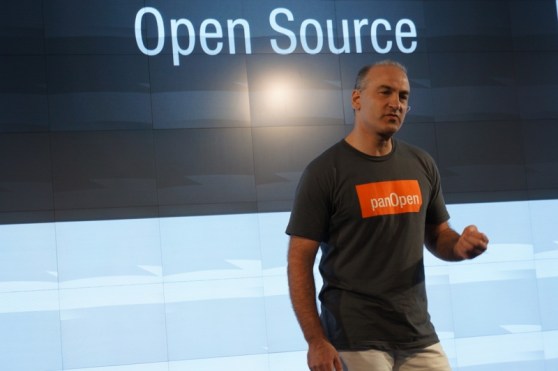 The pitch: Solving the problems of using free textbooks (OER) at institutions.
Funding: Raising $500,000, more than a third already committed.

Solving the problem of both expensive textbooks and the multitude of online content out there, PanOpen has developed a platform to let you dynamically bring online content into digital textbooks. For example, you can easily add a Khan Academy lesson into a digital book and rearrange its structure.

PanOpen charges students an access fee, which founder and CEO Brian Jacobs claims is a quarter the typical cost of semester’s worth of books. Students can also pay the fee through financial aid, just like physical textbooks. Since some schools also receive a portion of book sales, PanOpen also returns some of the revenue back to schools. The company now has 5 schools piloting its program. 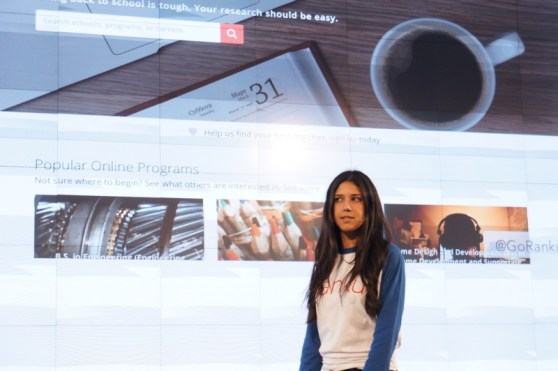 The pitch: Creating a beautiful marketplace for students to search for online degrees and for nonprofit universities to fill up their online programs.
Funding: Raising $500,000 with $350,000 already committed.

Kim Taylor, Ranku’s founder and CEO, claims it now has a $400,000 revenue run-rate. The company is currently working with more than 10 schools, and it just announced funding from Mark Cuban.

Verificient has developed patent-pending technology to prevent online testing fraud, which the company calls “proctorless identity verification.” The company’s technology keeps track of your face through your webcam to detect facial patterns and anomalies (it also scans your knuckles for verification). For example, it can detect when you’re left your seat, if you’re talking to someone else, or if someone is trying to take your test for you.

CEO Tim Dutta says Verificient is targeting a $9 billion addressable market. Current testing solutions require human proctors, but its solution is 50 percent cheaper (at $12 a test) than competitors since it’s entirely automated. The company has received five letters of intent to use its service from interest institutions.

The pitch: Jailbreaks the degree by tracking your lifelong education, both formal and informal
Funding: Raised $900,000 so far, opening an additional round soon

“Credentials are your currency,” says founder and CEO David Blake. The company has developed a way to rank a variety of online credentials (known as microcredentials), that could give employers a better sense of your skills than a standard degree.

Blake says Degreed is “jailbreaking [the degree], unpacking it, unbundling it, to gain recognition for everything we do to learn.” That can range from articles and videos you’ve viewed online to lessons from learning sites.