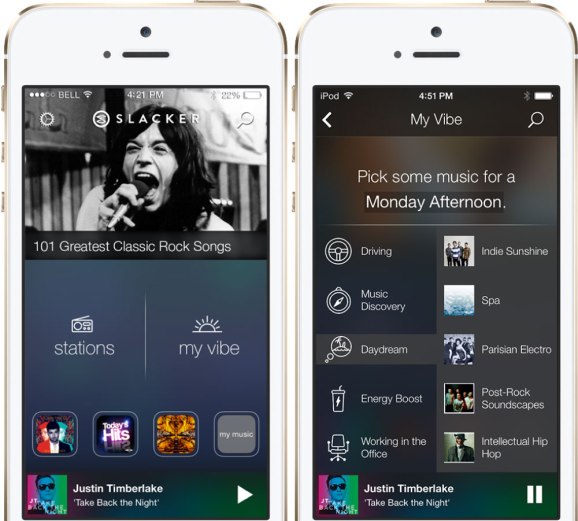 While Apple is readying the launch of its brand new iTunes Radio streaming services, the existing crop of big music services are all pushing out revamped versions of their own apps.

Among those services is Slacker Radio, which today rolled out a bold new iOS app that attempts to differentiate itself from both iTunes Radio and the recently revamped Pandora app . One way it does this is through a new “My Vibe” music discovery feature that similar in scope to Songza’s auto-generated playlist service.

Like Pandora, Slacker’s ad-supported free service allows users to customize smart radio stations based on an artist, album, or song. But unlike Pandora, Slacker also offers a premium tier service that mixes on-demand music listening as well as themed radio stations that are curated by a team of about 50 people, who may occasionally chime in between songs with facts or comments about the music selection. Slacker says those hand curated stations have proven very successful among its subscribers.

“We’ve been able to observe that over 80 percent of our paid members are [frequently] listening to these hand curated stations,” said Slacker Radio SVP of strategic development and content programming Jack Isquith in an interview with VentureBeat. “With My Vibe, we can take that human element and combine it with the data we’ve gathered from listeners to make something that does music discovery much different from anyone else.”

The new My Vibe feature, which can be accessed from the iOS app’s home screen, lets users choose a particular activity or topic. It then suggests a new station based on your selection, the curated station data, and your past listening behavior on Slacker. For example, lets say I’m feeling gangsta. Slacker’s My Vibe might suggest that I listen to a selection of music honoring the late James Gandolfini, which is composed of tracks from the custom Sounds of the Sopranos Slacker station created back in June.

While I haven’t had a chance to play with the My Vibe feature, it does sound a lot like what Songza is doing as I previously mentioned — auto-generated playlists to fit every situation, mood, or scenario. The big difference with Slacker’s My Vibe  is that this functionality applies to radio stations, (although anyone with a paid Slacker subscription should be able to get a playlist as well).

The new Slacker Radio iOS app is available now for free via Apple App Store. An updated version of its Android app should roll out in the near future, the company said.

For a closer look at the new Slacker Radio iOS app, check out the slideshow embedded below.