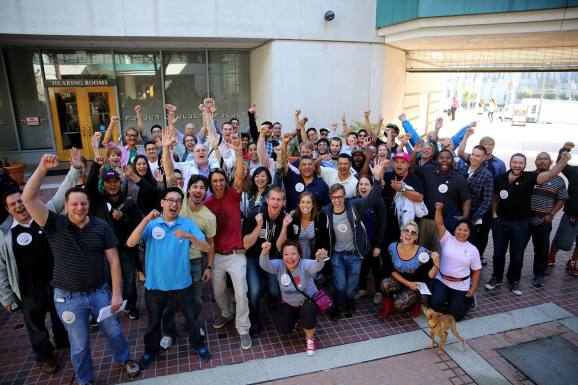 The Lyft team celebrating their victory.

Cab companies, brace yourselves. Ridesharing is here to stay.

California regulators have officially approved a set of guidelines that permit ridesharing services like Lyft, SideCar, and Uber to remain in business. This is the first time a state has set statewide regulations for ridesharing, and this could create a powerful precedent for cities around the country.

The California Public Utilities Commission created a new category called “Transportation Network Company.” Companies under this category must be licensed by the CPUC, require criminal background checks for each driver, establish a driver training program, implement a zero-tolerance policy on drugs and alcohol, and adopt a more stringent insurance policy than the commission requires for limousines.

Assuming they follow these guidelines, ridesharing services are legal.

Startups like Lyft, SideCar, UberX, and InstaCab have experienced a meteoric rise during the past year. Despite popularity from consumers, this rise has been fraught with conflict and legal battles.

Regulators and cab drivers across the country have repeatedly tried to push these companies out of business, and California’s decision is a watershed moment in this fight.

Ridesharing services (like those listed above) connect passengers with drivers via a mobile app. Drivers are not licensed taxi drivers, but regular people who have cars and are looking for some extra cash.

Cab drivers and regulators protested that these companies operate illegally, without proper safety, insurance, or precautions. Professional drivers are highly regulated, legally insured, and drive regularly inspected vehicles. Cab “medallions” (permits) can cost more than $250,000 and are hard to come by.

The cab industry remained largely unchanged for decades. Cabs are expensive and not always accessible, particularly in cities such as San Francisco. This situation inspired entrepreneurs to create more cost-effective, consumer-friendly, efficient systems.

These new technology-enabled systems pose a significant threat to traditional cab companies, but passengers, unsurprisingly, are thrilled with the alternative. Customers have powerfully advocated to get legislators behind ridesharing.

The CPUC issued cease and desist letters and issued $20,000 fines against ride-sharing companies in November. The community of drivers and passengers who used those services to get around quickly rallied and urged the authorities to stand down. The commission initiated a reexamination of its policies in December and a month later gave Lyft a green light to continue operating while it deliberated, suspending the fines and the letters.

Two months ago, the CPUC came out with a proposed decision that kept these cars on the roads.

“The commission is aware that TNCs are a nascent industry,” the proposal said. “Innovation does not, however, alter the commission’s obligation to protect public safety, especially where, as here, the core service being provided — passenger transportation on public roadways — has potential safety impacts for third parties and property.”

Now the state has accepted this proposal, which could become a model for other municipalities that are willing (or forced) to embrace this change.

Uber recently raised a whopping $285 million round of funding at a $3.5 billion valuation to fuel its international expansion. Lyft closed $60 million in May and has been entering new markets at an accelerated rate.

The San Francisco Cab Drivers Association has called these companies and their drivers criminals. This first stamp of state approval is legitimatizing, and cab companies may have to stop attacking, and start innovating.