Smule is launching a new version of its karaoke sing-along app that takes advantage of the unique processing power of the iPhone 5S to produce effects like the sound of someone singing in a shower. 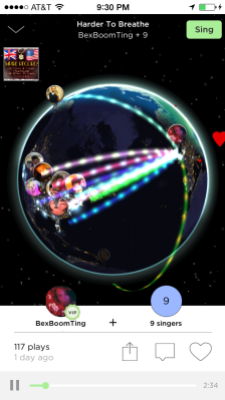 Above: The Sing! Karaoke app

Sing! Karaoke has been very successful, with 12 million free downloads to date. It is one of many Smule apps that have resonated with music fans.

Jeannie Yang, chief product and design officer, said, “We are trying to find creative ways to get people to create music.”

Yang said the company started the work just three months ago after getting wind of the specs from Apple. It decided to redesign the product to go with Apple’s iOS version 7, which debuted this week, and the iPhone 5S.

“We thought about what we could do because we have never seen this level of computing power on a mobile device,” Smith said. “It’s a fairly serious piece of hardware. It so happens that our audio problem is very math and CPU intensive.”

The new app simulates the effects of singing in different places, like the Sidney opera hall, a dorm stairwell, or the shower. You supply the singing, and Smule applies the special audio effect, based on what you choose. Prior versions of the iPhone can’t handle the new version of Sing! Karaoke with the new effects, but Sing! Karaoke itself will run on those older versions.

Sound waves bounce off of walls is different ways in places like churches or the Taj Mahal. So Smule wanted to reflect that in the app so users could have more fun and share their songs with friends.

“We built an engine to take your signal and run it through these environments,” Smith said. “These effects are possible with digital audio workstations, but most consumers have never had access to that.”

The iPhone 5S version of the app is launching today in the Apple iTune App Store. And yes, sadly, it won’t produce the same effects on an iPhone 5 or iPhone 5C.