TechStars is investing in its future startups in an interesting way: by buying a whole bunch of web domains.

The startup accelerator says that it’s bought NameLayer, a repository of  “high-quality,” tech-focused domain names that it hopes to put to good use in the coming years.

So why domain names and why now? NameLayer founder Julian Shapiro puts it simply: There are a lot of startups out there with really bad names.

“There’s a huge difference between a half-assed Web 2.0 company name and one that actually sounds right,” Shapiro said.

In other words, by buying NameLayer, TechStars hopes to make sure that its future companies come out with names closer to Zendesk than, say, Xobonko or BettrBoom (both of which are fictitious, thank goodness).

This is huge for the TechStars startups, who are given only a few weeks to develop not only a product, but also their branding, logo, and marketing. And not acquiring the right domain name can bring that entire process to a halt. 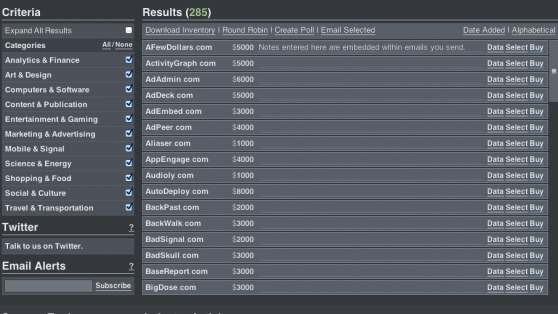 Above: The NameLayer approach is simple, but effective.

While Shapiro acknowledges that the “high quality” distinction is a bit arbitrary, it turns out there’s a whole process behind what NameLayer offers.

NameLayer’s domains, some of which sold as high as $9,000, were collected via an interesting sort of technical and linguistic analysis, which Shaprio used to find the real gems. Two word domains, for example, are particularly good (Socialbond.com, AdDeck.com), as are those that have few syllables and are hard to misspell.

“The idea is that you can come up with really good combinations that produce meaning via abstraction or alteration and also have a concrete use,” Shapiro said.

While some basic math would suggest that TechStars’s acquisition of NameLayer cost it over $800,000 (235 domains priced at an average of  $3,500), Shapiro said that the sale price was a bit lower than that. “The acquisition price wasn’t a huge number but it was the right number given the fact that we would have had to wait a long time to turn over the inventory,” Shapiro said. (Translation: The domains were sold wholesale.)

Considering that Shapiro could have also sold the domains to a company like GoDaddy, I can’t help but feel he made the right choice going with TechStars.