Evernote is transitioning from a software company to a lifestyle brand

Phil Libin is not your average technology executive.

During a recent conversation with the CEO of Evernote, we discussed his recent appointment to the board of the San Francisco Opera. Libin drew parallels between this century-old institution and his note-taking application, which he launched in 2004. He repeatedly stressed during our interview that Evernote would be a “100-year-old startup.”

Today, the company announced a series of partnerships with designers and a new line of physical goods, all emblazoned with the Evernote logo. 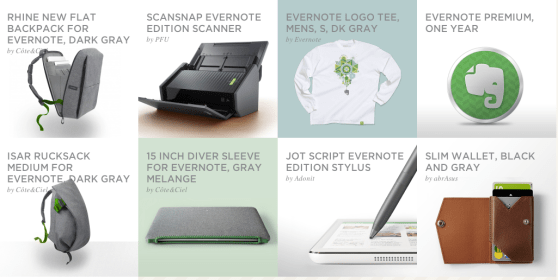 Above: New products are available for purchase on Evernote’s online marketplace

Libin, whose parents are both classically trained musicians, is on a mission to build products that can stand the test of time. What began as a software application is now a fully fledged consumer marketplace for exquisitely made hardware products and fashion accessories.

At his company and in his new role on the opera board, Libin is bridging the old and the new, the analog and the digital.

The company’s foray into physical products began in 2012. At last year’s Evernote conference, Libin shocked a roomful of technology press and developers by announcing a partnership with Moleskine, makers of beautifully crafted notebooks once used by Ernest Hemingway and Vincent Van Gogh.

VentureBeat executive editor Dylan Tweney then remarked that Evernote and Moleskin go together like “fixies and pour-over coffee.” Moleskine’s CEO Arrigo Berni told us that the line of Evernote compatible notebooks would appeal to people who live “in both the analog and digital worlds.”

Sales of the smart notebooks exceeded expectations (and generated a decent profit), so Evernote has been working on building more partnerships with top-quality brands. At its annual conference, the company showed off its marketplace of digitally enhanced physical goods, available to purchase on Evernote Market.

You can place an order for a high-end scanner, which comes with a year of Evernote Premium (worth $45). In mid-October, people who take copious notes can purchase a stylus, which you use write on tablets and smartphones. 3M will brand a new line of its iconic Post-Its with Evernote’s logo.

In addition, new fashion accessories for the modern professional include a classically Japanese wallet for $99 built using fine-grained leather and an Abrasus messenger bag for $199. For fans of Flight of the Concords, there’s even a line of business socks.

Evernote is not just a business brand; it’s also a platform for designers. Evernote Market provides a new audience of consumers– for Abrasus, the Japanese designer behind the messenger bag and wallet, this is the first time that products are available in the United States.

I caught up with Mariya Yao, the founder of design and branding consultancy Xanadu, for some insights into the new strategy. Evernote should now be perceived as a “premium business brand,” she said.

“After all, their message is ‘Using Evernote makes you more productive,’ Yao explained. “Being more productive means you’re more successful, which you can now project publicly by sporting the company’s premium gear.”

Libin once described Evernote as an “anti-social” experience — the note-taking app was developed just for you to store private thoughts or jot down recipes. According to Yao, this line of products is a departure from that kind of thinking. Evernote Market is an “outward projection of the productivity and success that Evernote is supposed to bring you,” she explained.

That said, Libin has frequently articulated that Evernote will be far more than a mobile and desktop app. During a recent visit to VentureBeat’s San Francisco office, he told us that Evernote is a system to remember everything, an “external brain” of sorts.

Libin’s dream does not begin and end with software.