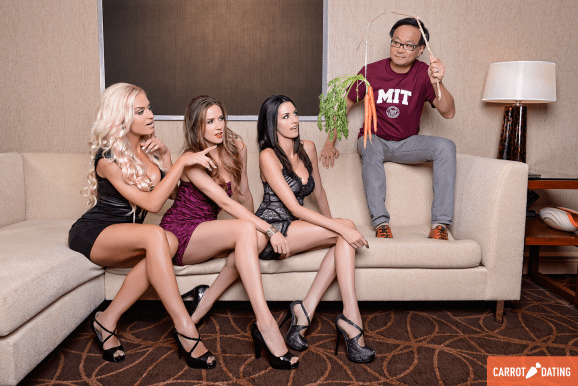 Women are like dogs. At least according to the founder of Carrot Dating, Brandon Wade.

Carrot Dating is the “world’s first bribe-for-a-date app,” although the world would be a better place without it.

With the app, people can “motivate” other people to go on dates with them by offering a bribe, or “dangling the carrot.”

The pitch e-mail from the PR person reads, “It’s a concept so simple that even animals understand — give a dog a bone, and it will obey. Give a woman a present, and she’ll … .”

She’ll what? Hit you over the head with it, I hope.

But it gets worse.

Carrot Dating released a statement about the launch where Wade is quoted saying, “I realized that women love presents like dogs love treats. Just as an unfriendly dog wouldn’t deny a tasty treat, any beautiful girl can be bribed into giving you a first date.”

After a few minutes of feminist outrage, indignation, and swearing off of carrots, I found myself torn between my desire to rip Wade and his neolithic app a new one, and not dignify the stupidity with coverage.

I ended up choosing the former.

Wade is the founder of series of well-known creepy, shallow dating sites for horrible people — SeekingArrangement.com, an online dating website for sugardaddies and sugarbabies; WhatsYourPrice, an online dating auction; and SeekingMillionaire.com, a millionaire matchmaking website.

The MIT alum has been widely criticized for building sites that enable rich men to pay for dates (i.e., sex) with attractive women. While this may not technically be prostitution, it is incrementally different from professional escort services and, in my opinion, disgusting, sexist behavior.

Wade claims to have a noble purpose here — helping unattractive, awkward men find companionship with beautiful women. He said that after repeated rejections when he was younger, he realized that a “nerdy smile” and a “sweet personality” wasn’t enough to attract beautiful women.

Bribes, apparently, help spark romance and get a foot in the door. Or as the case may be, a hand in the pants.

The implication is that men only care about having a hot babe on their arm, and women only care about money. Women are only worthwhile if they are beautiful and can be bought with a boob job or jewelry. Self-respect and 50 years of women’s lib be damned.

Carrot Dating features a variety of bribes to choose from. In addition to plastic surgery, the bribes are divided into five categories — dining, entertainment, gifts, activities, and popular. Oddly, a tank of gas was also listed as a possible perk.

A man buying a woman a meal is hardly unusual, or even sexist. But the notion that she is only going on the date for the free food is.

The tide can, apparently, go the other way — women can also offer men bribes to go on dates with them through the site. See, equality! Right? No.

Boston Magazine reported that 30,000 users have already signed up for the app. Who are these people, and what is wrong with them? I hope it’s just morbid curiosity.

The Pew Research Center released a report earlier today which found that one in 10 Americans is now online dating and that public attitude toward these sites has improved. People are so used to networking online that the idea of searching for dates, love, and even long-term partners online is perfectly acceptable.

What is not acceptable is the glorification and codification of chauvinism.