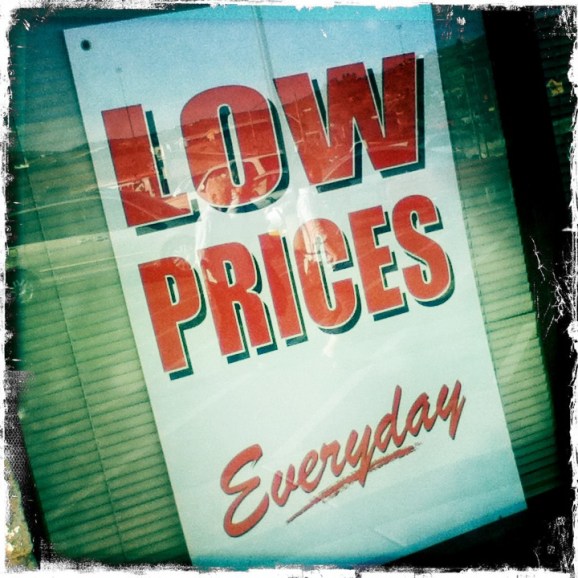 Every day we hear about investors chasing the new, shiny innovations that can add to the top line, but what about that other line — the bottom line?

With little fanfare, a new kind of disruption has been picking up steam — disruption in the cost of production. Uber and AirBnB are powerful examples of this trend. They allow owners to get a higher return on existing inventory with zero capital expenditures.

But breakthroughs in robotics, growing innovation in materials, and savvy predictive analytics are driving down costs for any company smart enough to get in on this trend.

Here are a few scenarios where lowering cost is a disruptive factor.

When we can bring it back onshore

Cost is being disrupted in manufacturing — but not by cheap labor.

For decades, we’ve scoured the globe for ever-cheaper labor, but a move toward manufacturing automation is changing the capital-labor mix. Lower cost but higher tech factories require skilled labor, education, and other resources that are in short supply in the cheap labor markets of the third world.

Recent investments by China in robotics are an acknowledgement that becoming the world’s biggest economy will require more than an inexpensive workforce. China knows that it needs to invest today’s profits in ways that compete with markets in the Americas and Europe that are quickly moving to high-tech manufacturing.

Automation isn’t the only thing that will disrupt manufacturing cost. 3D printing has great potential to further erode the allure of cheap labor markets. If we think there are clearly-defined limits to 3D printing, consider German company Voxeljet, which saw its IPO double last week thanks to its ability to print large objects.

This is a clear shot across the bow of offshore manufacturing. When software allows manufacturing-on-demand, the cost of innovation plummets and power shifts from giant factories (even automated ones) to smaller, less labor-intensive workplaces.

When precious becomes common (or gets replaced)

Likewise, there’s disruption when new techniques and automation make high-performance, expensive products cheap and plentiful. As an example, aluminum, once a precious component of high-end jewelry, is now inexpensive and adapted to many purposes.

The same thing is happening today in places like South Korea, where a manufacturer of aerogel powder, JIOS Aerogel, figured out how to massively disrupt the cost-benefit equation for insulating materials. Aerogel was created for the requirements of NASA spacecraft and performed at a level (and with a price) that was otherworldly. A significant drop in the cost of production has aerogel now being mixed with gypsum, sprayed as a coating, and otherwise finding its way into common products. Commoditization breaks the old adage, “Faster, better, cheaper… pick two.”

Sometimes the change happens as a replacement. The high cost and scarcity of rare earth metals drove the discovery of paper-thin carbon atoms, known as graphene, which can be manufactured in unlimited quantity for use in transistors and other components of increasingly smaller products like tablets, smartphones, and tiny sensors. We can expect scarcity to drive similar innovation as more countries compete for materials that are critical to manufacturing and security.

When the market can be predicted

Sometimes the change isn’t in cost, but in how much we buy.

The number of items we purchase impulsively is rapidly declining — and waste along with it. Powerful analytics allow for accuracy in forecasting that allows grocery stores to greatly reduce inventory spoilage while staying fully stocked with popular items. In an industry where a healthy profit sits at three percent and empty shelves hurt brand image and customer relations, spoilage cost falling away has a large impact.

Forecasting tools and an abundance of data allow energy companies to predict consumption with accuracy that allows them to contract for feeder stock like natural gas without buying in volatile spot markets. Data discovery creates customer and product understanding that allows retailers much higher sell-through rates and lessens merchandise discounting. Analytics enables Reliance Communications in India to predict and prevent subscriber churn, significantly lowering the overall cost of acquiring customers.

When the capital investment is negligible

Uber is now the world’s largest cab company without owning a single cab. This is extremely disruptive to businesses that were built on regulations designed to keep up the taxi company barrier to entry. Services like Uber are extremely efficient with their capital expenditures, and compete against companies that are the opposite. This radically different model has parallels to many other services like AirBnB, which transform every living space into a revenue-generating inn.

Falling cost of production can be more disruptive than we think. A textbook example of how to set up production today can be an outmoded and uncompetitive model tomorrow (textbooks themselves are a part of the disruption). The lead-time to set up overseas production can be an investment graveyard. What’s more, assuming a product will command a high price in the future is often a costly belief.

Falling cost presents an excellent opportunity to gain an advantage over those focused only on the top line or stuck in traditional business models. Avoiding disruption requires having very flexible expectations of cost and a careful eye for when cost suddenly falls away.

Chris Taylor is Marketing Director at TIBCO and writes the blog SuccessfulWorkplace.com. You can connect with Chris at @successfulwork.