Livescribe is launching a new smartpen today — Livescribe 3 — with a design that is built to work with smartphones and tablets. 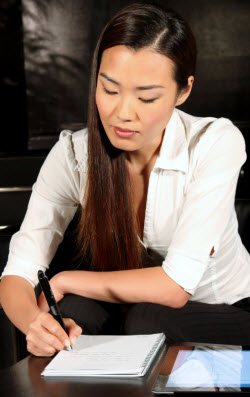 The smarter pen’s design shows how rapidly things have changed in the mobile device market. The new pen still captures your words and allows you to annotate them and turn them into digital data. It is targeted at serious note takers like business professionals and students. It still packs a lot of technology into a device that would ordinarily be just a dumb ballpoint pen.

But the pen no longer has a small display, as in previous models, and it no longer stores recorded audio on the smartpen itself. Rather, it uses the microphone on your mobile device to record voice on the tablet or smartphone. The device is really more like a mobile companion, and it has an app that helps it serve as such.

This pen comes in two models and has a capacitive stylus on its opposite end (not the point that you use to write). That means you can use the tip to tap your smartphone or tablet. It has an LED status indicator, a textured twist ring for retracting the ink tip or turning on the device, and it has a tungsten carbide premium ball tip.

The companion app can record and playback audio, organize data and search your handwriting, tag data, share and transform notes and audio, and incorporate other content such as photos. You can share these notes with services such as email, Evernote, and Dropbox.

The first Pulse smartpen, introduced in 2008, was all about syncing to your laptop and desktop. The company’s Sky smartpen of 2012 connected to Wi-Fi and synced to EverNote and the cloud. The new model is about linking to smartphones and tablets.

As with last year’s model, the new smartpen can capture writing, record audio, and then wirelessly transfer the captured data to a smartphone, tablet, or Evernote note-taking software on a PC. By doing so, the company makes it a lot easier to make use of and share notes from lectures that you’ve heard or meetings you’ve attended.

The Oakland, Calif.-based company can transfer your data to cloud services. Livescribe makes it a lot easier to back up your important notes. Once the data has been securely stored in the cloud, it becomes easily searchable and can be played back, organized, and shared. The target audience is on-the-go people, from executives to students. Those individuals don’t have to choose between writing on paper or writing on a tablet, as the Sky smartpen allows them to write an image on paper and have that image appear automatically on a tablet. 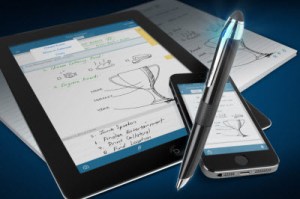 Above: Livescribe 3 with smart devices

Livescribe can also automatically transfer what you’ve written on paper to a tablet’s touchscreen. Livescribe says that 66 percent of its users say they take notes only on their smartphones, based on a national survey conducted in June among Livescribe owners. About 70 percent of smartphone owners and 80 percent of tablet owners say they want their notes on their devices.

But note-taking directly on tablets isn’t meeting expectations. Only 17 percent currently use their tablet for primary note-taking, with 56  percent of those unsatisfied or neutral. You can pair your smartpen with your smart device by twisting the middle ring to turn it on. The indicator will blink green to indicate the smartpen is in pairing mode.

Another version, the Livescribe 3 smartpen Pro Edition, sells for $200. It has a 100-sheet premium bound journal, a leather smartpen portfolio, a cable and the app, two cartridges, and a one-year subscription to Evernote Premium. The devices have 17 hours of battery life.

Last year, Livescribe said it had sold at least a million units since its debut in 2008. In September 2010, Livescribe raised $39 million in venture funding, and it has raised more than $100 million to date. Investors include Crosslink Capital, Scale Venture Partners, Qualcomm, TransLink Capital, Presidio Ventures, Keating Capital, and existing investors VantagePoint Venture Partners, Lionhart, and Aeris Capital. Michael Stark of Crosslink and Rory O’Driscoll of Scale will join Livescribe’s board. Livescribe licenses its technology from Anoto.