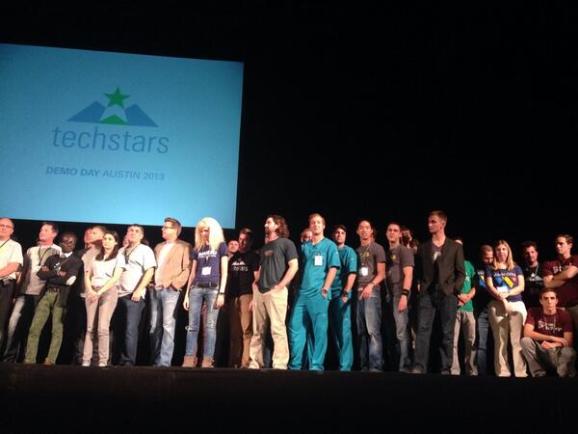 Today TechStars debuted its first crop of startups from its Austin accelerator program, and they certainly did not disappoint. And while I’m now a resident of Austin, Texas,  I still couldn’t believe some of these companies were operating and based here.

Here’s a look at the 10 startups that presented at the demo day event:

Filament Labs is a SaaS platform that allows health care providers to keep track of patients dealing with a chronic disease when they’re away from the office. It will essentially build a mobile app that nurses and doctors can “prescribe” their patients to use, which will take the place of the brochures, pamphlets, magnets, and other “homework” doctors assign that typically gets forgotten less than a week after a patient visits. The mobile app provides patient-specific health information as well as info about the practice, reminders for checkups, diet information, and more.

I’ve seen a lot of consumer-facing health startups, and I still find it very hard to believe that patients are going to consistently keep up with an app. That doesn’t mean there isn’t a need. I watched my grandfather document his blood pressure every night as a diabetic when I was still a kid, and if there’s an app that will make that kind of process things easier, then there is a chance it will catch on.

Filament labs makes money by charging practices for use based on how many patients they have. Twenty clinics will be using the platform by the end of the year, and the company’s investors will help it sell the platform in more locations in the future.

Testlio is a platform that helps companies test their mobile apps. More specifically, it operates as a directory of mobile app testers, listing their specialties, personality traits, and other quirks. The company pitch is that it’s tough to find a good team of mobile testers, or as Testlio founder Kristel Viidik put it on stage “testing is fucking hard.” The startup has over 1,200 testers available and a growing list of clients on more than 200 apps.

As for how it generates money, the startup acts as the middleman in paying those testers an hourly rate. It also charges clients a monthly fee for access to its platform.

Embrace began life as AuManil and offered mobile gaming apps a way to target the “whales” (e.g. people who spend lots of money) and help developers increase the loyalty of those users through data analysis (we covered the company back in 2012 during another demo day). Today, however, the startup seems to have evolved into something much more by ditching the focus on games and concentrating instead on retail locations. “In the online world, retailers use software to engage with customers because it’s easier,” said founder Bart Bohn, adding that this doesn’t exactly create the kind of impact that forges return customers.

“10 percent of shoppers will spend 50 percent of revenues for some businesses, [but] Very few actually need help with something,” Bohn said, based on what he’s seen from testing the technology. I wonder how many businesses truly think of driving business in these terms when it comes to online retail sales. It’s pretty easy to do if you’re the only one sitting behind the register all day. When you can’t see the register, the data provided by Embrace’s platform seems invaluable.

The company said it plans to launch a beta version in January with a handful of partners.

Proto Exchange is a platform for businesses that want to see all the available options when it comes to manufacturing. It specializes in creating a network of 3D printers. The platform does things like eliminate the weird window customers get whenever they make a large, last-minute order. The only experience I really have with this would be in the printing world, where our local newspaper would often team up with a few other local printers to pool resources whenever an extraneous job came through. Proto Exchange is now doing this for the 3D printing world, which is growing at a rapid rate.

The company has 16 beta produces that can see prices, locations, and materials of all the 3D printing manufacturing options.

Atlas is probably the coolest startup from the demo day. The company’s technology can better interpret data from wearable devices used to track fitness, exercise, and other mundane daily movement.

The company says most of those devices get thrown into a sock drawer after a few weeks because their value starts to wane. “Why? because the data you got was limited. Steps weren’t enough,” said Atlas cofounder Peter Li. He added that wearable devices don’t actually entice you to stay more active or improve your health.

During a short demo, he brought a personal trainer on stage to show that Atlas’ tech can distinguish between multiple activities, including steps, squats, curls, and more. Hell, the thing could even distinguish between a regular pushup and a triangle pushup. You can look at the data after a workout and immediately see what you still need to do. Li also said the data can be used to predict when you’re about to hit a plateau, making your workouts count every time.  (I could easily spend a few more paragraphs talking about the startup, but this is a roundup.)

“I’m going to help you get rid of the shit you don’t need anymore,” said Gone founder and CEO Nico Bayerque.

His startup is sort of like a reverse Amazon in the sense that it helps you sell things and get rid of them in about the same time frame as Amazon’s famous 2-day “Free” shipping. You can use Gone’s mobile app to take an inventory of all the belongings you don’t want/need, then find the proper marketplace to sell these items. Once you agree to the transaction, Gone ships you a box with the shipping information already pasted to it, and all you have to do is send it off.

Gone makes money by reselling these items for more than it paid for them, but also through partnerships with local donation and recycling centers that pay the startup whenever something is sent there. Bayerque said about 69 percent of the items that pass through Gone are sold and 31 percent are donated.

MarketVibe provides a content recommendation service for B2B companies. Think of it sort of like an Outbrain for content marketing efforts that are specific to a single company. Its tool allows clients to add the recommendations widget to the bottom of posts, and content doesn’t have to exist on a specific platform. That means you can recommend a white paper or a video interview you cut from SXSW at the bottom of a company blog post. This seems like a pretty sound business because there is plenty of value in creating content to drive business, but there aren’t tons of tools that cater to optimizing this.

Accountable is a service that attempts to help companies automate the process of becoming HIPAA compliant. HIPAA is the set of laws and regulations that businesses must go through to ensure that a customer’s personal medical data is secure and isn’t in danger of being compromised in the future. And thanks to a new stipulation to the act that took effect earlier this year, these regulations apply to most businesses or organizations (about 10 million) and not just those involved with health care. Accountable said it can boil the process down to a five steps that will take a company a few hours to complete. As Accountable founder Kevin Henry points out, trying to become HIPAA compliant on your own means sorting through a 1,000-page document. And the fine for each infraction will set you back up to $1.5 million in penalties.

Fosbury is a service that focuses on serving up coupons, reward cards, and gift cards — but not through applications. Fosbury uses mobile wallet services that are native to mobile platforms like Apple’s Passbook, Google Wallet, and Samsung Wallet. The startup pointed out that coupons drive $163 billion in sales every year, and only a small percentage of that is digital — meaning everyone else is still using those annoying paper coupons. (Ugh, paper.) It sees this as an opportunity for heavy growth.

When Ube got on stage and gave its demo, I was sure I’d heard nearly the exact same pitch before and that this one was probably just a cheap carbon copy. Then I realized that, no, it was actually the same company that won the People’s Choice award at DEMO 2012 (back when VentureBeat was still in charge of running that show).

Ube is a smart “dimmer” switch that does so much more than just dim the lights. The switch is an LED panel that shows you all the lights in a particular room and how much energy each is consuming. It can also show you the weather and sync up with your smartphone so you can control your lighting even when you’re away from your house. It goes well beyond the Philips Hue light kit, because it focuses on controlling things, meaning you can still technically buy and use Philips’ awesome color-changing lightbulbs, but now you’ll have greater control over them. Founder Utz Baldwin told me the Ube switches can do more as well, like integrating with your music system, alerting you when people are at the door, and letting you know when there’s severe weather on the way.

Ube runs $80 per switch and has a huge amount of preorders from all its previous buzz. The startup previously raised $300,000 from a successful Kickstarter campaign and another $1 million via Fundable. Its first product is scheduled to ship early next year. I want one.