Every day, we are awash with news of the latest gadgets, product launches and strategic moves of Internet giants. In this climate, it’s easy to lose sight of the important role technology can play in improving the lives of people around the world.

Twenty-three startups recently received awards for focusing their considerable talents on solving the basic problems of people in developing countries. If more of our collective innovation and investment dollars were applied to solving the world’s most pressing problems, picture the world we could create.

Imagine a lightweight, inexpensive fire-top device that enables households to cook a meal while heating water to temperatures high enough to kill waterborne bacteria. Imagine a simple, small, and affordable hydro power plant that uses the current of a river to provide electricity for the 1.4 billion people without access to electrical energy. Or imagine the impact of a low-cost, reusable and energy-efficient infant warmer, which addresses the critical challenge of preventing hypothermia for the nearly 13 million premature, low-birth-weight babies born each year in developing countries.

These are just a few of the pioneering technologies recognized for this year’s Siemens Stiftung “empowering people. Award”.

The Siemens Stiftung “empowering people. Award” is designed to find and support simple but intelligent technology solutions with the capacity to sustainably improve the lives of people in developing countries. The top three winners announced today — OneDollarGlasses, MakaPads and the Jompy Water Boiler — were awarded cash prizes totaling $113,160 to further their efforts. Each of the remaining 20 finalists received a $6,900 cash prize, and one solution — Solar Reflectors — received a Community Prize of technology valued at $4,140.

Here’s a look at the top winners and a sampling of other innovative finalists: 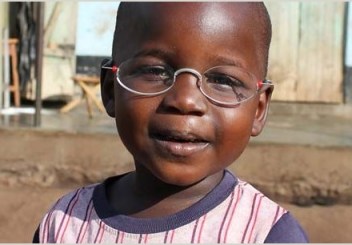 1. OneDollarGlasses (First Prize). The winner of the first prize, Martin Aufmuth from Erlangen, Germany, received $69,000 for his ground-breaking OneDollarGlasses. With millions of visually-impaired people living in impoverished regions around the world, the specs costing just one dollar provide a valuable contribution in empowering individuals to study and work unimpaired. The loss of income worldwide that occurs due to this issue is estimated to be around $120 billion per year. The OneDollarGlasses are manufactured on bending and milling machines specially designed for this purpose. The spectacles consist of a lightweight and flexible frame made of extremely robust, rustproof and hypoallergenic spring steel wire (1 mm). The frames are manufactured by hand on a bending device that does not need a power supply. The production process of a standard pair of glasses takes about 15 minutes (including the machining of the lenses) and can occur at home, meaning women can work and take care of their children at the same time.

2. MakaPads (Second Prize). The second prize of $41,400 was awarded to Dr. Moses Kizza Musaazi from Uganda. His MakaPads sanitary pads are as simple as they are ingenious. A packet of normal sanitary pads can cost twice the average daily income for people in developing countries. Often, women substitute ineffective and unsafe alternatives. Due to a sense of shame, many young girls no longer go to school with the onset of puberty and women are no longer seen in public. The affordable, locally-made MakaPads therefore make a difference to many women who would otherwise be marginalized in schools and workplaces due to a lack of alternatives. The production of MakaPads also creates local employment opportunities, since the relatively simple manufacturing process can be performed by people without training. Dried and pulverised papyrus fibers are processed into a thick paste with paper and water. This is then dried, smoothed, pressed and cut into absorbent inserts with mechanically operated machines. The pads are sealed in packs of three and then exposed to ultraviolet light to kill off all bacteria or germs. Made of natural material without any chemical additives, the pads are nearly 100 percent biodegradable and do not cause any intolerances. The mostly manual production process also requires very little electrical energy and can be generated via low-wattage solar panels.

3. Jompy Water Boiler (Third Prize). David Osborne from Celsius Global Solutions, U.K., received third prize and $27,600 for the Jompy Water Boiler, a combined water and energy solution. This lightweight, inexpensive fire-top device enables households to cook a meal while simultaneously heating water to temperatures high enough to kill waterborne bacteria, making it safe to drink or use for cooking and bathing. It is estimated that more than a billion people worldwide are without access to clean drinking water. As a result, waterborne diseases such as diarrhea kill 1.8 million people annually. Access to clean water alone could reduce deaths caused by diarrhea by up to 25 percent. The Jompy Water Boiler works equally efficiently on stoves or simple three-stone fires, making it suitable for use in both rural areas and urban dwellings. With the Jompy Water Boiler, the same fuel is used for both cooking and water pasteurization, and the heating process is quicker than with conventional methods. This leads to lower fuel consumption and reduced CO2 emissions. In field tests, families reported that they saved 3 kilograms of firewood per day and reduced daily cooking time by more than 3 hours. Financial savings amounted to 30 to 60 percent of their annual household income, enough to enable these families to send their children to school.

Above: The Jompy Water Boiler

4. Solar Reflectors (Community Prize). The Community Prize went to Gregor Schäpers from Trinysol in Mexico for Solar Reflectors, an invention that can be used to bake, cook, or fry food as well as to generate steam power. Schäpers received freely-selectable technical equipment valued at $4,140 to further support his project. The Solar Reflectors are particularly important in countries where small- and medium-sized companies are struggling to survive and are looking for potential energy savings and alternative power sources to combat exploding energy costs. Powered by a sensor-controlled motor, the reflector rotates, following the course of the sun and focusing its light on one point throughout the year. This focus collects the sunlight and can reach temperatures exceeding 1000 degrees Celsius. The reflector system is transportable and can be easily configured by hand to the angle of the sun, depending on the season. The concentrated energy can be used to heat a stove plate or oven in about an hour. Even the concentrated sunlight from one single reflector can be used for cooking and baking. There is no need to change the infrastructure: Anyone who uses a conventional stove can immediately do so with the solar reflector. Only the power supply changes; the method of cooking itself remains unchanged.

5. ROTOR Swimming Power Plant (Finalist). ROTOR is a small, hydro power plant that provides an easy way to generate electricity by using the current of a river. An estimated 1.4 billion people do not have access to electrical energy. In many regions, local generation is the only possible way to get power access. For families in rural areas near rivers, the ROTOR means the availability of renewable energy with a permanent output (day and night). It can be used for lighting, cooling, and operating electrical water pumps or for charging batteries and mobile phones. In comparison to small PV cells and wind turbines, the stream turbine has the advantage of producing energy 24/7 without the need for expensive battery storage. The IA vertical axis water wheel is mounted in the center of a circular tube. Induced by the flow of a river, the wheel turns like a turbine. The rotational energy is transferred by the axis to a wheel where several conventional bicycle dynamos — in the advanced version, a specially designed generator — transform the kinetic energy into electricity. The rotor is fixed to the embankment, a bridge, or something similar by mooring ropes. All of the materials of the prototype ROTOR are substitutable and are therefore available worldwide for little cost. The distribution of a self-built Rotor or a pre-fabricated construction kit could also offer opportunities for local businesses and create jobs.

6. SunSaluter (Finalist). The SunSaluter is an intuitive, gravity-powered device that helps solar panels follow the sun, collecting up to 40 percent more energy while simultaneously providing clean water. This aids impoverished communities in meeting their basic needs for electricity and safe drinking water. Solar tracking is achieved through balancing the weight on both ends of the solar panel. Controlled water flow adapts the balance of the solar panel, which is secured on a bamboo frame with a rotatable axis, to the direction of the solar radiation. The system is suitable for areas with near zenith angles of the sun, such as tropical and subtropical regions. The SunSaluter does not require electricity and can be manufactured from local materials and easily installed for less than $40, making it affordable to single families. The SunSaluter is primarily suitable for small PV systems, generating electricity to charge phones, lighting, or operating a small TV. This invention can replace other energy and water sources, which can be unsafe or require large investments of time to procure. 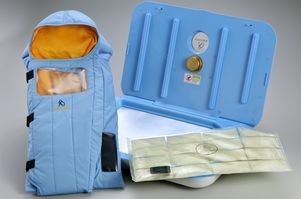 7. Embrace Nest. The Embrace Infant Warmer (Finalist). The Embrace Nest is a low-cost, energy-efficient infant warmer that helps prevent hypothermia for infants with low birth weight in developing countries. Approximately 15 million babies are born prematurely every year, 85 percent (nearly 13 million) of them in developing countries. More than 1 million of these premature babies die each year within their first month, but 75 percent of these children could be saved if the simplest methods were employed, such as keeping the infants warm the first few days after birth. The Embrace Nest infant warmer is a much-needed device, as even the big hospitals in developing countries are often not adequately equipped with working incubators. Its design resembles a miniature sleeping bag and incorporates phase change material, which, when warmed with an electric heater, maintains a constant, clinically-ideal temperature for up to six hours. Unlike traditional incubators, the infant warmer is designed to complement Kangaroo Mother Care (the practice of providing warmth with skin-to-skin contact), because it enables physical contact between mother and child. Notably, it allows mothers to breastfeed and gives them the flexibility and freedom to work, tend to family needs and perform other critical daily tasks.

Further background on all 23 finalists can be found on the award website.

Rolf Huber has served as the managing director of Siemens Stiftung since October 2012. Previously, Huber was a news editor for several years, followed by various positions at Siemens where he was responsible for external communications and the company’s government relations in Africa. During this time he also managed the company’s corporate social responsibility projects in Africa.