MyWebRoom, a web-based content discovery app, raised $2.8 million today, according to a filing with the Securities and Exchange Commission. 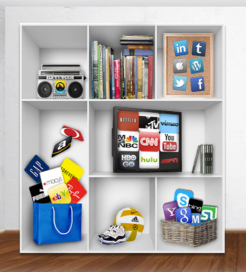 The company’s product takes the form of a virtual room that you can design to look the way you want it to. From there, you can pull in content from all over the Internet and store it in virtual bookcases that actually, well, look like book cases. This is the opposite of flat design here, people. You can put music onto virtual boom boxes, social networks into a wicker basket, video media on a virtual television, shopping sites into a virtual shopping bag — you get it.

You can also invite friends to come into your room by handing out special keys.

The idea is to alleviate you of having too many tabs open, which, admittedly can get a little annoying. The question is, will people want to open up a whole separate interface in order to access the content they enjoy?

Co-founder and co-chief executive John Gonzalez (also known as “Johnny Rooms,” according to the product website) is the only person listed on the filing. Gonzalez and his co-founder/CEO Artem Fedyaev first came up with the idea in 2011 and incorporated in 2012 after moving to Mountain View, Calif. from New York. The company is currently based in San Francisco, Calif.