On any given day in any given city, there are dozens of concerts happening in venues of all sizes, and Americans are spending billions of dollars a year to see them.

Jukely launched its “concert matchmaking” service nationwide today, which recommends live shows for you to see based on your music preferences and those of your friends.

“Concert promoters are leaving $24 billion on the table every year due to half of their tickets going unsold,” cofounder Bora Celik told VentureBeat. “The main reason is lack of awareness. It’s still hard to find out what’s going on without filtering through lots of noise, and even when you do, it’s hard to figure out who to go with, and when you figure that out, it’s hard to convince people to go with you.” 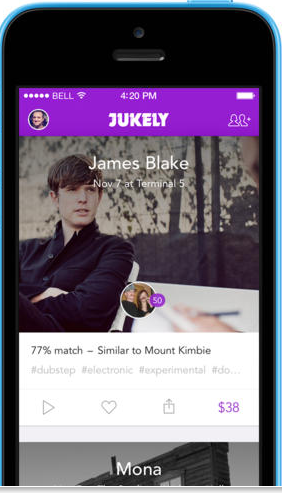 Jukely plugs into music services, like Spotify, Rdio, The Hype Machine, etc.. to gather data about your musical tastes. Its engine sends you notifications recommending live music shows you may be interested in, and suggests friends who may want to go with you.

The app also has messaging features to rally friends or groups of friends to see the concert, and you can buy tickets within the app

“Live music is a social experience, and existing solutions are tailored towards the individual,” Celik said. “We believe by making the the experience around live music more social, we’ll be able to expand the existing market in a significant way. If we succeed at this, more people could end up going to more concerts.”

Celik was educated and trained as a software developer, but describes himself as a “music nut” at heart. He has hosted radio shows, DJed at clubs, and put on nearly 100 shows as a concert promoter, with well-known acts like Tiesto and Kaskade.

Cofounder Andrew Cornett was the first designer at Kickstarter and helped build their website and iPhone app, before leaving to start Jukely.

“As a concert promoter, I’ve experienced the problems of the live music industry first hand,” Celik said. “As an engineer, I’ve always looked for solutions to get more people out to my shows. Andrew and I love going to shows together with our friends and meeting new music friends when we go out to shows. We wanted to make something we’d enjoy ourselves, while taking a stab at a huge industry problem.”

The Internet upturned the music industry and threw it into crisis mode by fundamentally changing how music gets distributed. It opened up channels for people to listen to music for free, and realigned the existing power and financial structures.

This created more opportunities for small, independent artists without the backing of a major label, to get their music out there, build a following, and promote their work. Music consumption these days is distributed among more artists than ever before, and its a full time job keeping up with the latest music acts and their touring schedules.

PriceWaterhouse Coopers estimated that spending on concerts and music festivals will grow from $8.7 billion 2011 to $12.2 billion in 2016. It is the leading factor for the U.S. music market’s growth, and makes up for declines in recorded music sales.

This creates an environment where people are spending major money to go see live music, and with all the options out there, they need help figuring out where to go and what to see.

And as no-one wants to go see concerts alone, social features are important.

Jukely was designed with all these trends in mind. It makes intelligent recommendations based on your personal data, it incorporates social features, and it makes buying easy.

Celik said the goal is to get people excited when they get a push notification from Jukely, because they know the show will be something they want to see.

Recently added features include a music player that lets you stream your Rdio or Spotify account so you can listen to music from bands playing near you. You can find friends from Facebook, Twitter, and contacts, add shows to a calendar, and pull up your tickets within the app. Active members can also earn points and win free concert tickets.

It’s most direct competition is WillCall, a mobile app that presents a curated list of live music shows happening within a two week period. WillCall puts less of a focus on social recommendations, and more on offering expert recommendations.