This morning, Distimo launched the first free and open API for app store data from almost every single app store that matters on the planet. 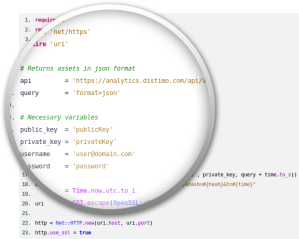 Pretty much, any app store not on the list is not one you’re worrying about.

Clearly, that’s a lot of data, and a ton of competitive intelligence that app developers and marketers can use to inform their own user acquisition and monetization campaigns — often in real time.

“One of the primary use cases is market intelligence, but we do indeed see many of our developers using it for real time tracking of their apps, especially because they spend a significant amount of money on advertising,” Remco van den Elzen, Distimo’s cofounder and chief commercial officer, told me via Skype.

Hence, of course, the API, rather than just a web viewing-and-downloading system.

With the API, developers can build systems that enable rapid responses to changes in sales, in-app revenue, reviews, and more. Besides downloads, revenue, and rankings, the API also includes access to breakdowns by location, including country and continent, and devices. And implementing the API should be simple — Distimo has provided example implementations in C#, Java, Javascript, Objective-C, PHP, and Ruby, so pretty much any language you might be using besides Python is available. 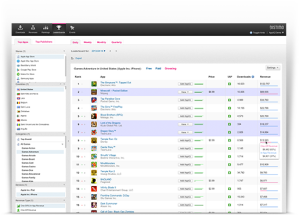 “Our focus has always been on making it as easy as possible to gain access to the most accurate and actionable market data,” Remco said. “The public release of our Distimo API will enable organizations of all sizes to make the best informed business decisions about their apps – from everything to analytics to market trends to lead generation.”

There are a few restrictions on the available data.

If you don’t have any apps of your own, you can receive the app leaderboards that Distimo maintains, and track the rankings, over time, of up to 10 apps. If you do have your own apps, you’ll also get the key data for all of your own apps.

“Our Distimo AppIQ data, which allows anyone to track estimated downloads and revenues for any app, is also available through the same API as well, but AppIQ data requires a paid subscription,” Remco says.

That could get costly.

AppIQ starts at €1,200 a month, and increases depending on the number of countries and categories that you want to track. Of course, there is that famous old quote: “If you think education is expensive, try ignorance.”