Coy Christmas has come to expect a healthy dose of skepticism when he pitches his startup’s file-sharing technology.

“A lot of really smart people have told us it’s physically impossible,'” said Christmas, Fasetto‘s chief technology officer, in an interview with VentureBeat.

Then Christmas will pull out two smartphones and demonstrate their lack of cell, Wi-Fi, Bluetooth, and NFC connections. For good measure, he’ll even yank out their SIM cards. Then, when they’re supposedly off the grid, he’ll take a picture on one phone and send it over to the other one using Fasetto’s “PDQ” (Pretty Darn Quick) app. 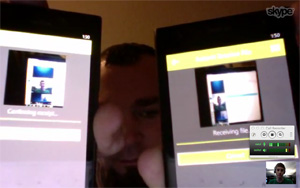 Above: A PDQ demo via Skype

It’s no trick: I watched a live demo via Skype (pictured right) in which Christmas did exactly what’s described above, and VentureBeat’s sales director saw it in-person at this month’s Cloud Expo.

Here’s how Fasetto explains it:

Smartphones, tablets, and laptops all have wireless chips that, theoretically, should enable them to communicate with each other without a router or some other networking device in the middle. But hardware vendors like Apple and Microsoft define how their devices are going to operate, so the reason they can’t communicate at that level is strictly a matter of software.

What Fasetto has done is strip back that software.

“We’ve gone right down to the hardware level and rewritten the transport layer, so we’re talking directly to the hardware chips on the device,” said Luke Malpass, Fasetto’s lead (and currently only) developer. “And then we’ve built a whole new layer on top of that that is standardized in our software — so an iPhone and a Windows Phone are going to know how to discover each other and communicate, because they’re using our standardized layer, as opposed to the incompatible standards that are out there today.”

So while PDQ doesn’t require existing connections, it uses the existing wireless chips to send data across short distances, which could be useful during power outages or natural disasters. That means you can’t have your iPhone in airplane mode while using PDQ, for example, because then it wouldn’t be able to tap into its wireless chips. You shouldn’t need to jailbreak your device to make PDQ work; the app alone does the trick. (Whether Apple and other app store operators will allow PDQ on their marketplaces is a separate matter.)

PDQ is nearly twice as fast as other methods of file sharing because of its lighter security layer, claimed Malpass. But that doesn’t mean PDQ is insecure, he stressed, explaining how every transaction uses a unique cipher that’s only ever used once. It’s also more difficult to intercept, because information doesn’t need to travel over a network or the Internet; information gets encrypted on one device and is sent directly to the other device, where it’s decrypted.

Fasetto is testing its app primarily on devices with Wi-Fi and Bluetooth chips, because they’re the most common wireless technologies. If devices have both Wi-Fi and Bluetooth, PDQ can break the transfer into components and use both wireless technologies for even faster file transfers (although Bluetooth is notoriously slow, so how much it will speed things up is questionable). Practically, this means you could send a 100 MB file to the person sitting next to you in under a minute, according to Fasetto.

Fasetto is hoping to raise $152,000 through a Kickstarter campaign, which the two-person startup launched late last month. The team needs a tad more than $100,000 in just 11 days to reach its goal.

If the campaign succeeds, Fasetto will hire more developers and a marketing coordinator. If it doesn’t, “We’ll figure out a way to make it work,” said Christmas.

There’s always venture capital. “I actually have a plane picking me up [from Superior, Wisc.] on Wednesday,” laughed Christmas, who said interest from the venture capital community and the telecommunications industry has risen dramatically since the Cloud Expo.

The company plans to have a beta up and running next month, with an improved version of the app that features phone calls and text messages available early next year. There are also plans to include a cloud storage component, which will use either Amazon Web Services or Microsoft Azure — Fasetto is currently debating which one is a better fit.

The end goal for Fasetto, said Christmas, is taking back control of our technology. “We want to provide people the ability to communicate all the time and put them back in control of their device.”