What’s the point of Google’s new Nexus 5 phone? That’s the question I asked myself after spending a day with it a few weeks ago. Its design is flat-out boring. It doesn’t offer as many features as other top-of-the-line Android phones, and it doesn’t make much of a case for keeping Google’s Nexus phone lineup around. But after spending more time with the Nexus 5, I learned that’s exactly the point. Priced at just $350 off-contract, the Nexus 5 is a cheap way to get a powerful, unlocked, pure Android experience.

That’s it. Don’t expect high-end camera quality here or useful features like the HTC One’s Blinkfeed. The Nexus 5 is pure minimalism. That’s something we haven’t seen before from the Nexus line, but after last year’s Nexus 4, it’s a move that makes  sense for Google. The Nexus 4 was also surprisingly cheap unlocked, but it tried to inject a bit of bling in its design (to questionable results — I grew to hate its glass and semi-holographic rear design). The Nexus 5 says “to hell” with glitz and glamour. And after seeing just about every smartphone maker trying their damndest to one-up each other with giant screens and superfluous features, this is a bit refreshing. 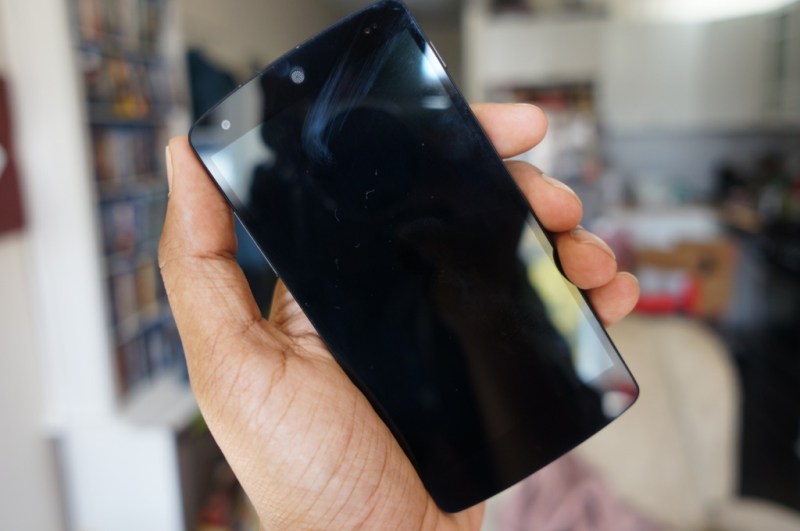 When Google finally unveiled the Nexus 5, after plenty of leaks and rumors, it looked like a device that had somehow missed its final design phase. It simply screamed “prototype.” But despite looking very plain (I still have trouble finding it when it’s sitting beside other phones or on a dark table), the Nexus 5’s soft case makes it feel comfortable in your hand. It’s a tall phone, but not awkwardly so.

Its 4.95-inch screen is bright and sports accurate colors, and it also performs better outdoors than the Nexus 4’s screen. The big “Nexus” branding on the phone’s rear makes a somewhat loud statement, but given its overall lack of design flourishes, I can excuse this. The Nexus 5’s camera, on the other hand, sports a garishly large ring that feels out of place amid the device’s otherwise simple design. It also has a multicolored notification light at the bottom of the screen that comes across as mostly useless, since it’s basically always blinking. There are apps that let you label specific notifications with colors, but otherwise a simple blinking light is no comparison to the Moto X’s innovative screen notifications. (Personally, I’ve never found notification lights all that useful, but I may just get too much email to ever make them useful.) It feels almost as if Google and its hardware partner, LG, just gave up on the Nexus 5 in the middle of its design phase for fear of overdesigning it, as happened with the Nexus 4.

What the Nexus 5 lacks in looks it makes up for in speed — but that’s true of just about every smartphone sporting a new quad-core Snapdragon 800 processor these days. It feels a bit faster than the Samsung Galaxy Note 3, which sports the same processor, but that’s likely due to its lack of third-party software crud. The Nexus 5 was also the first phone to ship with Android 4.4 “KitKat,” which brings with it a brighter design scheme and Google Now (Android’s slick self-learning personal assistant) integration right on the home screen. By saying “OK, Google” on the home screen, you can shout commands such as asking for the weather, a specific Google search, or directions to your next meeting.

Previously, you had to manually access the Now prompt. Swiping left on the home screen also brings up your Google Now cards, giving you access to plenty of useful information without the need to ask. The Nexus 5, just like theMoto X, makes it clear that Google Now is perhaps Google’s most important product. It’s a way to unify its search smarts with all the data Google has collected about you, and it offers insights that no other search engine can give you. But the Moto X’s ability to listen to your voice commands at all times, even when it’s asleep and sitting on your desk, once again one-ups the Nexus 5. By this point, Android KitKit has made its way to other popular phones, so it’s less of an immediate selling point for the Nexus 5. Also, can you believe this thing is only $350? At least, if you get it from Google. The Nexus 5 costs $450 on T-Mobile (company reps note that it pays full price for the phone from LG, a sign that Google is subsidizing the phone’s price to offer it for less). Still, the Nexus 5 shows that smartphones don’t have to be expensive to be high-quality (the iPhone 5S and most other high-end phones cost over $600 off-contract).

The bad: Hope you like vanilla (and a so-so camera)

While the Nexus 5 has a great price and (mostly) great hardware, little differentiates it from the other high-quality Android smartphones out there now. The Moto X is far more forward-thinking in its features, the HTC One is better built (thanks to an all metal case), and the Samsung Galaxy S4 packs in all the features you’d ever want (arguably, more than you actually need). The Nexus 5, like the Nexus phones before it, is laser-focused on satisfying discerning geeks and developers. They are the people who would need a cheap and unlocked Android phone, those who want the updates as soon as Google makes them available. I realize this is an unpopular opinion, but it’s hard to convince a typical consumer to shell out $349 for their phone when they can get a comparable model for no money down (even if it involves signing a carrier contract). And despite promises that it was focusing on camera quality this time around, Google has once again delivered a Nexus device with a surprisingly lackluster camera. The Nexus 5 generally takes better photos than its predecessor, but I still found it frustratingly inconsistent. In the right light, and at the right angle, the phone is capable of taking some gorgeous shots. But the problem is we’re rarely in ideal shooting conditions. Most of the time, my photos with the Nexus 5 looked washed out and dull, especially compared to what you can get from the iPhone 5 or any of Nokia’s Lumia cameras.

The mark of a good smartphone camera is one that can take good pictures as quickly as possible, with little preparation. In that respect, the Nexus 5’s simply fails.

Do we even need Nexus phones anymore?

I ended my initial preview of the Nexus 5 with this thought: “As other Android phones get cheaper, other manufacturers and carriers move quicker with Android updates, and Motorola continues to spearhead Android hardware innovation, the Nexus line’s days seem numbered.” While I’ve warmed to the phone since then, I haven’t been able to shake the idea that Google won’t really need the Nexus line for much longer. The Nexus phones have always felt like a way for Google to gain some control in the Android world as the OS spread like wildfire across the mobile landscape and out of its grasp. They gave Google a way to send updates quickly, without relying on slow carriers and phone makers; a way to experience Android phones without the crud of third-party software; and a way to offer an inexpensive way for developers to get an unlocked Android phone. But over the years, both carriers and manufacturers have significantly sped up their Android upgrade efforts.

Google has also taken to providing key updates directly to Android devices through Google Play Services rather than through huge Android updates, Ars
Technica points out. HTC and other Android manufacturers have also significantly slimmed down the software they place on their devices. And in some cases, as with the Moto X, the additional software actually improves on what Android offers natively. At this point, the Nexus 5 is mainly appealing for its price. And if Google is indeed subsidizing each Nexus 5 by around $100 to reach its $349 price, that’s not something that will scale well to millions of consumers.

The verdict: A solid no-contract smartphone

For the price, you won’t find a better unlocked Android smartphone out there today. The question really is, do you want more than that? If you’re looking for a phone that gives you a glimpse at the future of mobile computing, go for the Moto X (or hold out for an eventual higher-end model from Motorola). If you simply want the best smartphone on the market right now, regardless of cost, the iPhone 5S is a far better choice. And if you’re looking for the best Android hardware, I suggest waiting a few months for Samsung and HTC’s next flagship devices (or pick up the S4 or HTC One for cheap now). At the end of the day, the Nexus 5 is a phone that only the most discerning buyer should consider. Everyone else has plenty of other options.