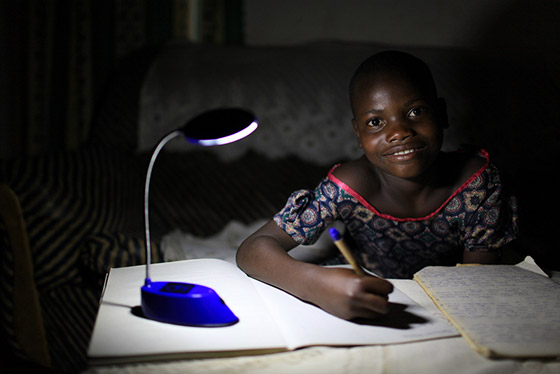 A beneficiary of Solar Sister.

Kiva is launching Kiva Labs, a new initiative that aims to generate $25 million in loans for clean energy, mobile technology, and agriculture. Google granted Kiva $3 million for winning its Global Impact Award, which is funding the project.

Kiva Labs ushers in the era of “Kiva 2.0,” moving beyond finance to couple money with products and services.

Founder Premal Shah described it as a “testing ground for innovation.” Despite major technological advances, millions of people still lack access to this innovation, or the resources to scale their own innovative ideas.  Kiva Labs wants to fill this gap.

“Kiva Labs is inspired by the knowledge that high-impact solutions already exist in key development areas such as clean energy and agriculture,” Shah said.”The challenge is finding funding for these solutions to scale and increasing access for people who need them.”

Kiva pioneered the idea of online “microfinance” for good. It connects lenders with borrowers in the developing world who need a small amount of capital to achieve a specific goal or get a business off the ground. These are people who aren’t otherwise able to secure a loan from banks or traditional microfinance institutions.

With this new initiative, Kiva will loan money to 100,000 borrowers to “relieve the cost constraints on new ideas,” and help them scale. Kiva will also experiment with new financial products for borrowers to see what works, what doesn’t, and ultimately “get high-impact products to people who have been too long overlooked.”

“We want to move microfinance into areas where other funders won’t go,” Jason Riggs, Kiva’s director of communications, told VentureBeat earlier this year. “It is getting mature enough at this point that we can push the boundaries a bit more, and evolve to reach more people in isolated regions.”

Since 2005, Kiva has facilitated over $500 million in loans from 1 million lenders, with a 99 percent repayment rate. Its site features hundreds of loan opportunities for people in the developing world. Projects include buying sewing machines and fabrics to help women in India start a tailoring business, or helping a Georgian farmer buy seeds for his farm.

These are very specific projects, which while important, don’t address the root causes of problems or create widespread solutions. Helping a student pay for college is not the same as tackling the barriers that exist between people in poverty and education.

Kiva Labs creates the opportunity to fund ideas and technology, in addition to people.

Examples of loans made through Kiva Labs so far include Solar Sister, which uses a network of women sales agents to bring clean energy to rural communities in Uganda that lack access to electricity. It is also working with Nuru Energy, which has built a “POWERCycle pedal generator” that charges LED lights. Kiva partner Grameen App Labs is building a network of “farmer leaders” in Uganda that use mobile devices to share agricultural information.

These organizations are examples of “social entrepreneurship” — a buzzword for businesses that also work towards social objectives, and have a “do good” mission at their core. TOMS shoes a well-known example of this — for every pair of shoes sold, TOMS donates a pair of shoes to a child in need.

The movement extends beyond for-profit companies, and also encompasses applying certain elements of startup mentality (scaleability, efficiency, high-growth, high-impact) to the world of non-profits. By thinking outside of the box and using technology intelligently, charitable organizations stand to achieve more.

Kiva has made a strong effort recently to expand its scope beyond microfinance. It is piloting a peer-to-peer lending program called Kiva Zip, and Riggs said it is working with field partners to offer “wraparound services” such as neonatal healthcare or business training. Kiva teamed up with Dosomething.org in August to create a mobile game that aims to get teens involved in fighting poverty.

“Global poverty affects billions of people,” Riggs said. “This is a matter of building a movement.”