Want to learn to code? You’ll have plenty of options to choose from, with dozens of providers promising to teach you computer programming skills in no time.

But Benjamin Plesser, founder of EngineHere, believes he’s found the optimal “learn to code” model. Plesser is a software developer who realized that online video tutorials can only go so far. Most people find it difficult to learn on their own — it’s typically a far better experience when you can collaborate with peers and receive advice from more experienced developers. 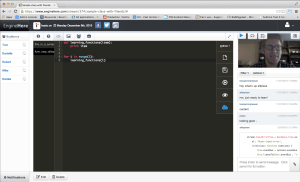 Above: A virtual classroom on EngineHere

On EngineHere, for $199 to $299 (the price will depend on the amount of instruction you need), you can sign up for coding classes with teachers in virtual classrooms. Between 10 and 20 students meet twice a week — these students receive 20 hours of group instruction total.

Typically, the instructors will step in to answer questions and present problems to the group in a combination of video and text chat. The experience isn’t dissimilar to a group chat on Google Hangout. Plesser, a Dartmouth educated programmer who previously worked at daily deals site Yipit, said EngineHere “simulates a traditional, live classroom experience.”

According to Plesser, what differentiates EngineHere from rival online education providers is the feature that lets teachers and students pair up and execute their code live in the browser. “That is a huge instructional tool and completely unique,” he said. The video technology was developed using open-source real-time communications project WebRTC.

Students can augment their lessons on EngineHere by signing up for free classes on a number of alternative sites, including nonprofit Code.org, Codecademy and Khan Academy.

Plesser plans to reach out to the developer community to ask them to become coding instructors. He has already received inbound requests to teach courses in a variety of languages, including Javascript, Haskell, Scala, and Java.

He hasn’t done much marketing for EngineHere but has already received 200 email sign-ups for the first class. This demonstrates the surging interest in coding education, which is only set to increase with Code.org’s recent “Hour of Code” campaign.