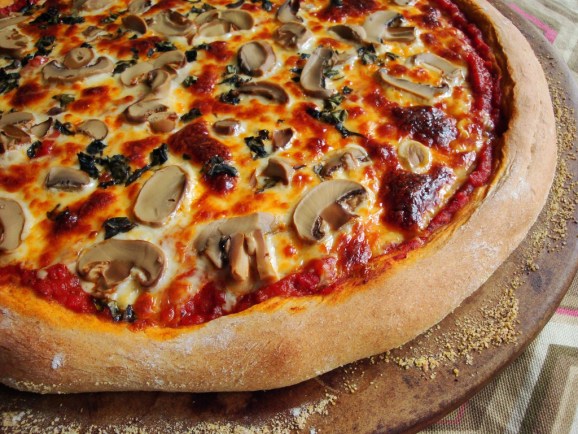 Bitcoin, the digital currency that has drawn the infatuation of investors and techies around the globe, has gone mainstream in a big way. Today, the New York Times has two stories on Bitcoin, including one about a programmer named Laszlo Hanyecz who paid 10,000 Bitcoins for two pizzas from Papa John’s back in 2010.

Those Bitcoins, which Hanyecz “mined” on his computer, were worth 0.003 each, and he got $30 worth of pizza for them. By November, speculators had driven the exchange rate for Bitcoin to $1,242, or about the price of an ounce of gold. The pricing has fluctuated as China cracked down on the virtual currency, but at one point the Bitcoins used to pay for those two Papa John’s pizzas were worth $6 million.

The 32-year-old Hanyecz told New York Times writer Nick Bilton that he had no regrets. If the price of Bitcoin collapses, he’ll have gotten a good deal on that belly full of pizza. But that pizza could very well be one of the most expensive transactions Hanyecz has ever made.

Bitcoins are created, or mined, based on a set of mathematical formulas. A computer can solve the problem and generate Bitcoins as a reward. The coins are stored in digital wallets and you can buy real things with the virtual currency. Only 21 million Bitcoins have been created, and about half of them have been mined. The digital sleuthing becomes more difficult over time, and so everyone is in a race to mine them. But the mining becomes harder over time.

Bitcoins are accepted as payment at more and more retail outlets and web sites.

But the price has been volatile, with the market capitalization swinging from $14 billion to $8 billion in the last month. Everyone is trying to figure out where the market will hit its peak. Hanyecz gave up as the cost of mining soared (in terms of electricity usage alone) and sold his Bitcoins for $4,000 as the price hit $1 (a while ago).

Meanwhile, the New York Times also profiled a heavy-duty virtual mining operation in Iceland, where 100 servers in an Arctic air-cooled data center search for the new digital gold. Since the Bitcoin mining is getting harder to do as it yields Bitcoins at a progressively slower rate, the mining could take 100 years to complete. Now well-heeled speculators are getting involved in the mining, using heavy-duty data center infrastructure.

“What we have here are money-printing machines,” Emmanuel Abiodun, 31, founder of the company that custom-made the machines for the Bitcoin mining, told the New York Times. “We cannot risk that anyone will get to them.”

The mining is like trying to guess at a lottery number. The network’s protocol, designed by an anonymous programmer who goes by Satoshi Nakamoto, was designed to release a new block of Bitcoins every 10 minutes until all 21 million were released. The blocks get smaller over time. If the miners in the network take more than 10 minutes to guess the correct code, the Bitcoin program adapts to make it easier. If it takes less than 10 minutes, the code becomes harder. In the end, mining for Bitcoins is like owning a piece of a private jet.

Today, all of the machines around the world dedicated to Bitcoin mining have a computing power that is 4,500 times the capacity of the U.S. government’s best supercomputer, the IBM Sequoia, according to Michael B. Taylor, a professor at the University of California, San Diego. Of course, the NYT article notes that the Bitcoin mining industry is risky as scammers are trying to fleece customers who don’t understand Bitcoin. That includes just about all of us.