Pebble’s little smartwatch is growing up.

The company today took the wraps off the Pebble Steel, a sleeker, more professional Pebble that trades plastic and bright colors for brushed metal and black matte.

Eric Migicovsky, Pebble’s CEO, says that the Pebble Steel was born out of simple reality: As much as geeks love the original Pebble, the device just isn’t fit for mainstream consumption. It’s too lightweight, too colorful.

“The aesthetics just weren’t there. We treated that as a design problem,” Migicovsky told VentureBeat.

Put another way, Pebble knows that before it can get its smartwatch on more wrists, it first has to make its smartwatch look like something that most people would actually wear. And while that sounds like an obvious point, it’s still one that companies like Samsung and even Nike seemed to have missed.

With the Pebble Steel’s design upgrade, though, comes a price upgrade as well: The Pebble Steel will run for $250, a hundred dollars more than the original Pebble. 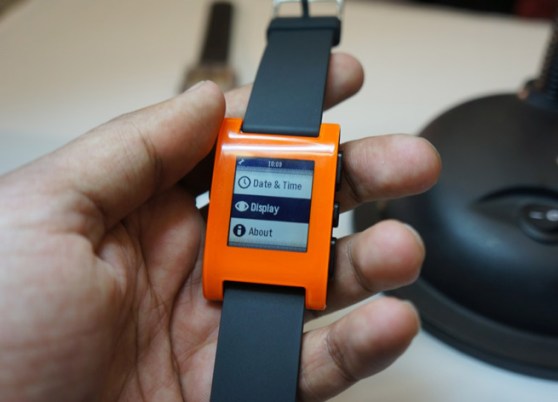 Above: Pebble has come a long way in a short time.

The Pebble of today is a very different company from the Pebble of 2013. Since shaking off its notorious manufacturing issues last year, the company has managed to get its devices out to 300,000 consumers and Kickstarter backers. That’s no easy feat for a company that was born a little over a year ago.

The Pebble Steel, in that sense, is a good metaphor for Pebble itself: As the company grows up, so too must its devices, platform, and overall market ambition.

The platform aspect is particularly big for Pebble as it heads into 2014. The Pebble app store, announced last month, will launch at the end of the month, and Pebble has already gotten big companies like Yelp, Pandora, ESPN, and Foursquare making apps for it.

Migicovsky is adamant about what he wants for Pebble’s apps, though. Rather than create software that mimics what people can already do better on their smartphones, Migicovsky wants Pebble developers to design only what makes sense for Pebble’s form factor.

For Foursquare, this means making an app that consists entirely of the check-in experience. For Yelp, it means beaming new venue recommendations directly to the Pebble’s screen.

“You don’t need to replace the entire phone on people’s wrists. It’s about figuring out key aspects that can be reproduced,” Migicovsky said.

Again, that seems like a simple notion, but considering how new the smartwatch market is, there are very few notions that we can take for granted.