San Francisco-based technology executive Ben Nelson has set out to kick Harvard off its pedestal.

Nelson, 38, is launching a new college via the Minerva Project, which he refers to as the “reimagined university.” Students can live anywhere in the world and enroll in courses online. Now his vision is becoming a reality via the Minerva Schools at KGI, a joint venture between Nelson’s Minerva Project and the Keck Graduate Institute, a member of the Claremont University Consortium in southern California.

In building Minerva, Nelson says he has scrapped every commonly held assumption about how people should be educated.

“We are effectively building a perfect university,” he told me in an interview at the VentureBeat offices in San Francisco. “We are trying to educate people who we would be excited to see in positions of leadership and influence in the world.”

It may sound far-fetched, but Nelson has recruited a roster of high-profile figures who also believe that the current system is broken. Stephen Kosslyn, a neuroscientist and the former dean of social sciences at Harvard, is the founding academic dean (Nelson said he poached Kosslyn after a series of dinners with their wives). Larry Summers, the former Harvard president, was the chair of Minerva’s advisory board until recently. And former Senator Bob Kerrey, who led the New School in New York, is heading up research and scholarship at Minerva. In April of 2012, Nelson succeeded in closing $25 million from venture firm Benchmark Capital, which should sustain Minerva for some years if (and that’s a big if) tuition money rolls in.

Minerva may face a tough road ahead recruiting 18- to 22-year-olds, and as education analyst Michelle Rhee-Weise points out, “head-on attacks with established institutions rarely succeed.” Rhee-Weise believes that Minerva has the best shot of succeeding if it positions itself as an “alternative experience for those driven enough and talented enough to succeed in a traditional, elite school.”

Minerva is currently accepting applications for its inaugural class. Nelson predicts that in a few years, it will be more challenging to get admitted to Minerva than into the most prestigious universities in the world. Students will be judged on academic merit alone, he says. Freshmen will not be admitted because of their last name or skills on the football field.

How do you build a perfect university?

Minerva has borrowed some aspects of the traditional university experience. The program is four years long, and students typically start at the age of 18.

But Nelson has shattered some key assumptions about education, namely that students should learn in lecture halls and classrooms. His core curriculum won’t force students to read the great works of literature. Instead, students will learn modern skills, such as advanced stats, behavioral economics, computer science, and more.

It’s reminiscent of Enstitute in New York, which generated a great deal of buzz for its “college alternative” for dropouts. Students at Enstitute learn deep technical and managerial skills they would not be typically exposed to at college.

At Minerva, all the courses will be taught online. The benefit of an online education is that professors can view analytics in real time to discern how students are performing and adjust the curriculum accordingly. It’s an entirely different model from a lecturer pontificating from a podium with no idea whether anyone is listening.

The trouble with online education

That said, online education has run into its own share of problems. In April, San Jose State in California needed to shutter five of its online courses (developed in partnership with online education startup Udacity) when more than half of the students enrolled failed the final exams.

As University of Virginia English Professor Mark Edmundson wrote in an op-ed, online learning is fraught with problems. In physical classrooms, some instructors at top universities are “superb at sensing the mood of a room,” and “a large lecture class can also create genuine intellectual community,” he argues. Edmundson believes most online education today is a monologue, and not a real dialogue.

Other recent experiments in digital education have been a hit or miss, so massive open online education providers — the “MOOCs” — are hoping that Minerva will succeed in order to validate that their model can work amongst intellectually gifted, full-time students. At San Jose State, many of the students enrolled in online courses were juggling part-time jobs.

Minerva is betting on the MOOC trend; its students will study independently and in interactive video seminars.

Another benefit for intrepid explorers: At Minerva, languages like Spanish and French will not be offered. Instead, students will spend each semester living together in a different world city. “The courses are online, so faculty and students can live anywhere,” said Nelson.  “All we need is beds and bandwidth.”

“The plan is for the students to remain in a residence hall in San Francisco for their freshman year. After that, they will travel for the next six semesters to six different countries. Nelson is currently looking at potential halls of residence in Istanbul, Rio de Janeiro, London, Berlin, Mumbai, Hong Kong, and Shanghai. Students live together to gain a sense of community, but participate in classes online.

“Just imagine the possibilities: We’ll have students working for our student paper in 25 countries, and our students can experience the great museums and symphony orchestras of the world that don’t exist on university campuses.” Nelson is also working to develop partnerships with companies and industry leaders in each of these cities, which would be an impressive feat if he can pull it off.

“Their idea that the senior capstone requirement would be judged by industry leaders — a business proposal getting accepted or essay being published — is much more focused on student-learning outcomes that translate readily into the world outside of academia,” said Rhee-Weise.

The final differentiating factor is price: Students can expect to pay about $10,000 a year to attend Minerva, which is a darn sight cheaper than most U.S. colleges. The students in the first batch will receive their education for the entire four years for free. In future, scholarships and financial aid will be available for all students, although the university is not accepting federal financial aid.

Nelson is not shy about expressing his belief that most universities are a ripoff. “You are out $20,000 to study Spanish at one of these universities. For that price, you could live in the Ritz Carlton in Madrid and hire a private tutor for a month,” he scoffed.

Can Minerva compete for talent with Harvard? 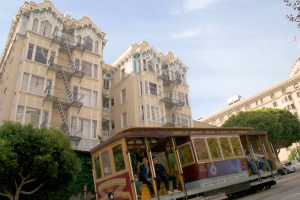 Above: Minerva’s first hall of residence

The first class at Minerva will be intentionally small; likely around 15 or 20 students. In the fall of 2014, these young collegiates will live together in a residence in downtown San Francisco. A larger, full class of students will start in fall 2015.

According to Nelson, Minerva has already received hundreds of applications. These applicants will need to pass a “battery of tests.” It will not require SAT scores.

At most universities, “you can’t really flunk out,” Nelson claims, although that it is a bit of an exaggeration. His point is that Minerva is intended to be far more rigorous, so the deans won’t let in students that can’t handle the pace. “Our intellectual criteria is off the charts,” said Nelson, who intends to admit students “at the top half of the Ivy League.”

Nelson is one of these Ivy League students, having graduated from the University of Pennsylvania. During college, he realized that the education system was flawed. But he didn’t set out to do something about that until recently, after stepping down as the chief executive of Internet company Snapfish.

Nelson is confident that students will be willing to pay the fees and will apply in droves. The timing may be right, given the surging interest in online education, particularly the MOOCs. However, others have tried and failed — notably, UNext, which launched in 1997 as a web-based graduate university.

Nelson is deep in the process of hiring deans for the various departments, including the business school. The first business classes won’t start until 2016. Minerva degrees will likely soon be regionally accredited, as the university recently partnered with Keck Graduate Institute, or KGI, a small school that is part of the Claremont consortium of universities.

Minerva may have the best shot of success if it markets itself as an institution for lifelong learning, but Nelson seems focused on reaching gifted high school seniors. “That 18- to 22-year-old population of students [who are applying to college] is dwindling, so it’ll be interesting to see if Minerva will adapt accordingly or continue to target the students who are looking for a more traditional campus-based experience,” said Rhee-Weise.

Corrections 1/6/2014:  The college is called the Minerva Schools at KGI, not simply the Minerva Project. The inaugural class begins in fall of 2014, not 2015. Larry Summers was the founding chairman of the Advisory Board but its two year term is now over and he is no longer affiliated with Minerva. Scholarships and financial aid will be available for all students, including foreign students, but Minerva is not accepting federal financial aid. Minerva does not require SAT scores.