Someday in the not-so-distant future, we may be able to control our smartphones with our minds.

That is just one of many possible applications for OpenBCI — a company building an open-source brain-computer interface (BCI) for hackers and makers. OpenBCI is a breath away from achieving its $100,000 Kickstarter goal, and it just launched a 3D-printable helmet-like EEG device, so anyone can print and tinker with their own.

“We are approaching the growing field of brain-computer interfacing from a new angle,” cofounder Conor Russomanno said in an interview with VentureBeat. “Most of the groups who have taken BCI out of the lab put intellectual property around it. We are building a truly open platform that doesn’t blackbox any of the tech or algorithms. This is the way innovation will happen best, when its transparent and everyone has access.” 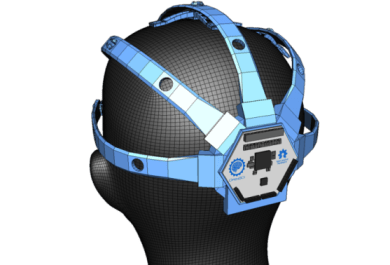 OpenBCI developed a customizable and affordable headset that uses electrodes (EEG) to record the brain’s electrical signals. This brainwave data is mapped through the BCI board and then relayed to a computer, which processes it.

The package comes with OpenBCI’s “signal capture system” (headset with circuit board) and electrode starter kits, and costs it $300.

This technology has existed in the medical field for a long time, but Russomanno said the decreasing material costs, advances in computing, and a growing consumer interest in collecting personal data has created an “infinite” world of new opportunities.

“BCI is going to provide the missing link between us and technology and strengthen our relationship with it,” he said. “It opens up an entire new field of being able to understand ourselves and how we interact with our environment.”

Russomanno said that BCI could set the stage for “bio-immersive games,” where games passively respond to your thoughts, energy, and emotions. Collecting brain signal data could also give people greater insight into their habits, struggles, diseases, and addictions and push psychology and behavioral science forward.

“People care so much about efficiency and productivity, but we see all of those relationships as qualitative,” he said. “It is hard to quantify environmental stimuli and how we feel. BCI provides a true quantitative measure for how sleep or time of day affects our mood and productivity. Or for psychological conditions, to classify on a scale someone’s level of depression, or what triggers their inability to concentrate.”

Russomanno studied engineering and design at Columbia and Parsons and said he became fascinated by the brain after a series of personal experiences — his grandmother was diagnosed with a rare brain disease, he saw family members struggle with addiction, and he suffered a concussion from rugby.

He realized just how much about the human brain remains a mystery.

“We have mapped the entire human DNA spectrum — we know little building blocks that produce us from an embryo, but we don’t understand complexity of our brains,” Russomanno said. “We can replace any organ in the body, but when it comes to brain, as soon as we start to lose it, thats the end. I think space and the brain are the final frontiers.”

A couple of commercial EEG readers are on the market, but Russomanno said these do not target developers or makers. These companies sell a finished product that doesn’t lend itself to experimentation. He and cofounder Joel Murphy wanted to create the “Lego version,” giving people building blocks so they could turn the core technology into anything they want.

The founders intend to build OpenBCI into a business, which could be a challenge because it is open-source.

“The idea is that if we make good hardware, we can sell it,” Russomanno said. “In open-source, you have to keep moving. You can’t come up with a cool design, patent it, and sit on it a while. It keeps inventor honest and keeps us working, and if someone goes out and does it better than us, good for them.”

This Kickstarter project will support OpenBCI’s efforts to boost interest in this field and get its existing hardware ready for mass production.

Furthermore, Russomanno said he has been growing a “Kickstarter” beard he won’t shave until OpenBCI achieves its goal.

“I’m not superstitious,” he said. “But I really want to shave it.”

Doesn’t look like he as much longer to wait. The campaign is at $98,454 at the time of publishing.