If you’re a woman (or a guy) with long nails, smartphone touchscreens are tough to hit accurately. That’s because they can detect the electrical charge on your finger, but won’t work with a fingernail tap. That’s where Elektra Nails comes in, turning a false fingernail into a conducting stylus for your touchscreen. 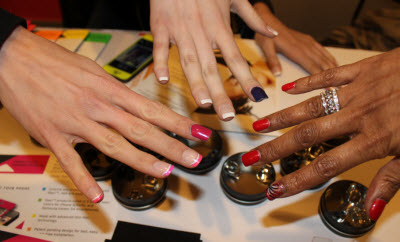 Above: The forefingers have the Elektra Nails false nails that work with touchscreens

“I had problems a few years ago hitting the target when I got my iPhone because of my nails,” said Sri Vellanki, head of Elektra Nails and a dermotologist. “I had to work around my nail to hit the screen.”

Vellanki funded the project herself and showed off the touchscreen-sensitive nails at the Eureka Park startup zone at the 2014 International CES last week in Las Vegas.

“You can be very precise in what you’re doing,” Vellanki said. “Our babysitters use it to play Candy Crush Saga. Artists can use it to be more precise.”

Vellanki has applied for a patent on it. The nails will hit the market in about eight weeks through the company’s own web site and in partnership with new distributors. Elektra Nails has partnered with Momentum Labs, which is also building a thin touchscreen cover to market. Momentum was created by Jamie Temple, who founded and sold off Case Logic in the 1990s. 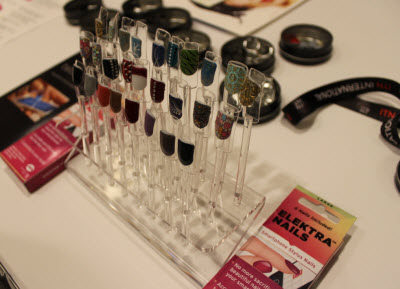 Above: Elektra Nails has glue-on nails for touchscreens.

The nails work on all smartphone devices, and you can paint over them however you want. You just wear a single Elektra Nail on your fingertip. Each application lasts for about seven days. Elektra Nails packages six nails in each package.