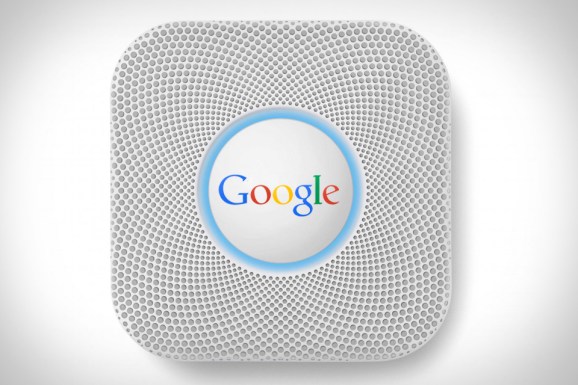 Here’s one way Google could make sense of all the hype around the “connected home.”

Google just announced that it’s snapping up Nest, maker of smart thermostat and smoke detectors, for $3.2 billion in cash. Nest has raised around $80 million from investors including Shasta Ventures, Kleiner Perkins, and Google Ventures.

Most recently, Nest was rumored to be raising a massive round of about $150 million, which would have valued it around $2 billion. From the looks of it, Google likely decided to go for broke and buy Nest outright rather than participate in another round.

Nest has been one of the most interesting startups to launch over the past few years. It’s run by Tony Fadell, who notably spearheaded development of the iPod at Apple, and it’s one of the few connected home gadget makers to have found a modicum of success.

Above: The Nest learning thermostat

Nest launched in 2011 with the Nest Learning Thermostat, a connected thermostat that learns your habits and helps you save energy. It followed that up with the Nest Protect smoke and carbon monoxide alarm, which can communicate with the Nest thermostat to form a very basic network of home appliances.

“Nest’s founders, Tony Fadell and Matt Rogers, have built a tremendous team that we are excited to welcome into the Google family,” said Google CEO Larry Page in a statement. “They’re already delivering amazing products you can buy right now — thermostats that save energy and smoke/CO alarms that can help keep your family safe. We are excited to bring great experiences to more homes in more countries and fulfill their dreams!”

Nest says it will continue to operate under CEO Fadell’s leadership.

“Google will help us fully realize our vision of the conscious home and allow us to change the world faster than we ever could if we continued to go it alone,” Fadell wrote in a blog post today. “We’ve had great momentum, but this is a rocket ship.”

For Google, Nest could serve as its gateway into the connected home, the notion that all of our appliances and gadgets will soon communicate with one another. That’s a concept that we’ve seen breathlessly promoted at CES and other big tech events over the past few years, but Nest remains one of the few companies to deliver on its promises.

Pre-empting privacy concerns, Nest co-founder and EVP of engineering Matt Rogers noted in a blog post that Nest customer data will be limited to “providing and improving Nest’s products and services.” While that could always change down the line, for now there’s a clear wall between Nest’s customer data and Google.

Google has talked about plans for its own connected home platform, Android @Home, over the past few years, though details about it remain unknown and a release date is still nowhere to be found.

The Nest acquisition also seems to fit in well alongside Google’s recent moves to snap up several major robotics companies. If anything, Google is now positioning itself to be the centerpiece of all of your future technology interactions. Imagine waking up to a perfectly warmed house, thanks to your Nest; being driven to work in a car using Google’s self-driving technology and Android dashboard; and getting home just as your Google robot has finished walking the dog.

I’m not saying all of Google’s bets on the future will pan out, but at least it isn’t afraid to try.

(And, yes, if you’re the paranoid sort, Google is the real-world equivalent to Terminator’s Skynet. Be afraid. Be very afraid.)