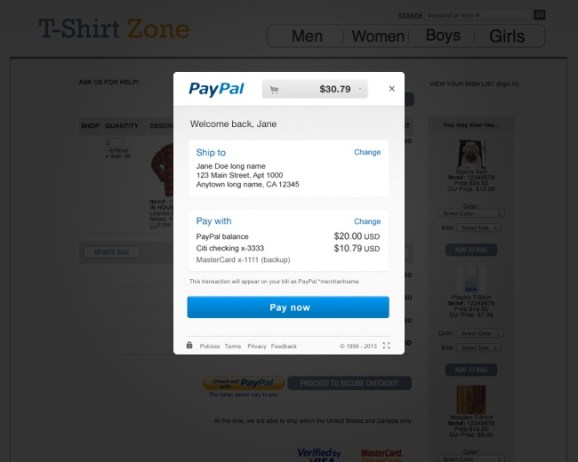 Checking out with PayPal online is about to get a lot easier.

Today PayPal introduced a new “in-context” checkout experience, which lets you pay for items at online retailers without getting redirected to PayPal’s site. The new process looks much simpler, and it should work better for less tech-savvy shoppers who may get frightened off by PayPal’s clunky redirects.

Judging from screenshots released by PayPal, its new in-context checkout appears as a pop-up within a retailer’s site. It also easily allows you to switch between your payment options (for example, taking money straight from your bank account, or from your credit card), something that PayPal has been criticized for obfuscating in the past.

PayPal also announced the slight expansion of two of its new programs: Payment Code, which lets you pay for items in physical stores using a QR code or four-digit number on your smartphone, will soon be available to Discovery and MICROS merchants. Meanwhile, PayPal says it will soon be testing its Beacon hardware device in the U.K., Germany, France, and Canada. Beacon, which can check you in to PayPal in stores to encourage paying through PayPal’s app, is already being tested in the U.S. and Australia.