Parallel processing chip design firm Adapteva has raised $3.6 million in a round of funding from Carmel Ventures and telecommunications firm Ericsson.

The Lexington, Mass.-based company will use the money to complete prototypes for its chips that it touts as energy-efficient parallel computing chips. The deal is a big endorsement for Adapteva’s technology, which can be used to provide energy-efficient parallel processing in telecommunications basestations — such as those made by Ericsson — and a variety of other supercomputing devices.

The funding comes on the heels of the company’s success in the fall of 2012 when it raised almost $900,000 on Kickstarter to build a $99 Parallella supercomputer for everyone. That campaign was part of the company’s effort to build community support around its hardware among hobbyists and other hardware enthusiasts.

Adapteva was founded in 2008 to develop a brand new architecture with a focus on energy-efficient chips. It designed a 16-core parallel processing accelerator and a 64-core chip in 2011. Now it is trying to bring those Epiphany chips, which can operate on 2 watts of power, to manufacturing. The processors can deliver about five gigaflops of performance per watt. 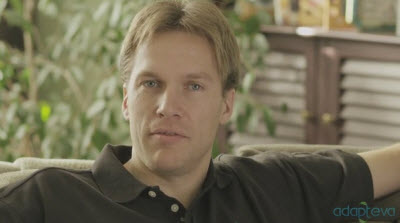 Above: Andreas Olofsson of Adapteva

Most chip projects costs huge amounts of money and use lots of engineers. But Adapteva has made it this far with just five people. The new funding will keep the dream of building a new chip architecture alive.

“We’ve been waiting for our moment to come and I think we are almost there,” Andreas Olofsson, chief executive and founder of Adapteva, in an interview with VentureBeat. “We’ve been running on a very low capital structure for six years now. Selling a new processor architecture is almost impossible. But we have one of the most efficient chips in the world.”

Olofsson said that Adapteva’s parallel processors — which have many brains, or cores, working at once — offer a 25 times edge in computing efficiency when compared to older approaches.

“The potential for major returns in energy efficiency and performance gained from parallel processing are clear, and in fact critical, to support rapid growth in the telecoms industry. This makes innovations such as Adapteva’s very exciting for Ericsson and for the customers we work with,” said Sebastian Tolstoy, Ericsson vice president of business development.

To try to bring Adapteva’s chips to a wider market, Adapteva launched Parallella, a tiny supercomputer, in 2012. The Kickstarter campaign raised money to develop a $99 circuit board for Kickstarter donors. In doing that, Adapteva followed in the footsteps of fan-hyped hardware companies like Rasberry Pi, the credit-card sized computer that can play games like Quake.

It hasn’t delivered the boards to its 6,300 Kickstarter backers yet, but Olofsson said the company would do so now that it has more money. Shipments are targeted to be completed by the end of the first quarter.

Open source community members are contributing software for Adapteva. Olofsson said the company can chain multiple Epiphany chips together for a total of 4,096 cores in a system. That could be useful in scientific computing, telecommunications, and embedded vision.

“We’re going to be the most open chip company around,” Olofsson said.

Adapteva will compete with rivals such as Tilera, Nvidia, Advanced Micro Devices, ARM, and Intel. So far, 8,500 systems have been preordered. Olofsson said 140 universities are collaborating with Adapteva to educate students on parallel computing, and there’s a fairly large scientific computing customer waiting in the wings. Olofsson has more than 20 patents issued or pending. He’s a former chip designer for Analog Devices.

“Parallel processing and high performance computing (HPC) are of huge interest to us as these markets are developing quickly and changing dramatically,” said Ori Bendori, partner at Carmel Ventures. “Adapteva’s approach is very different than the traditional silicon vendor model and we believe this could lead an industry transformation – just the type of innovation we like to invest in.”