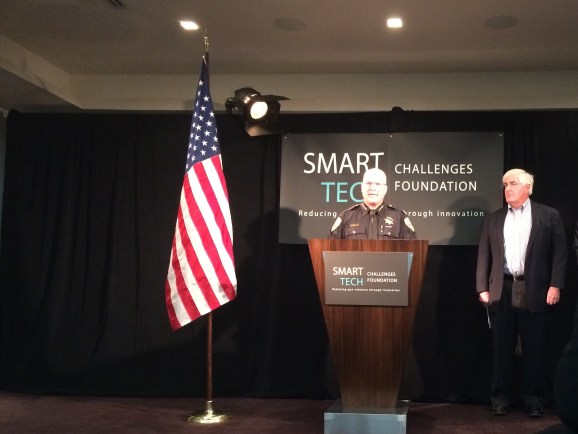 SAN FRANCISCO — The Smart Tech Foundation is calling on the tech community to solve one of America’s most pervasive and tragic problems — gun violence.

It is posing four $1 million challenges to motivate entrepreneurs to apply their talent and ingenuity towards reducing gun death and injury.

The Smart Tech Foundation is a response to the Sandy Hook shootings. This tragedy shook the nation on Dec. 14, 2012, and yet we have made little-to-no progress to address the problem — 12,000 people have been killed by guns since Sandy Hook, including 573 children and teens.The U.S. saw 23 mass shootings in 2013.

The mission of the Smart Tech Foundation is to hack through all the politics and bureaucracy and inspire progress through entrepreneurial solutions. It was started by Ron Conway, a famed angel investor known for advocating the use of technology to address civic issues, along with serial entrepreneur Jim Pitkow

“Let’s use innovation to bring about gun safety and not rely on Washington,” Conway said at the kickoff event for the firearm safety challenge. “The tech community wasn’t engaged with this issue before, but the Sandy Hook massacre should cause people to act. We are innovators, and we want entrepreneurs to invent ideas about gun safety.”

Conway compared this effort to the invention of the seat belt. He said that Volvo created the three-point safety belt, and that created a market for safety in automobiles. Since then, driving is seven times safer on a per mile basis, and he said a market solution like this could have the same impact on gun safety.

“We believe in the free market and the democratic process,” Pitkow said, who serves as director of Smart Tech. “This is about examining the current realities of gun violence and the systematic market failures in terms of innovation and active capital. This is not about gun control. In no way do our efforts challenge the right to bear arms. We are calling upon brightest minds in world to create opt-in solutions that strengthen the rights of gun bearing citizens and increase the safety of Americans.”

The foundation is accepting applications starting today through March 31, 2014, and candidates at all stages of “technological readiness” can apply, meaning you can have just an idea or a product already in the market. A panel will review the proposals and allocate the funds to the most promising ideas. The goal is to provide structure and focus to these entrepreneurs as well as access to experts, money, tools, and any other resources they might need.

A few companies already developing products to promote gun safety attended the event today as examples of what technology can do.

Armatix built a radio-controlled watch that restricts gun access and use. This “smart system” means the gun can only shoot if it is in range of the watch or if the gun owner releases the safety mechanism by entering a PIN code. If the gun loses contact with the watch, it automatically deactivates.

Everlokt is working on Safe Access Ammunition (SAAMO) technology. It makes ammunition as well as computerized gun handles that limits who can fire the guns. Salus Security Devices built a biometric locking station for guns that recognizes fingerprints, and Sentinel built an “Identilock” mechanism that covers the firearm trigger until a fingerprint unlocks the device.

Sentinel founder Omer Kiyani was shot when he was 16 in a drive-by shooting while he was out with his friends.

“I am a gun owner, I am a parent, and I am a victim,” he said. “I remember seeing the fear in my parents’ faces that day. I never ever want to see a child go through something or have a parent go through the same thing. As a responsible American, I am passionate about solving the gun violence issue — it is not bigger than American ingenuity.”

Ben Tomb is the CEO of Salus Security Devices. When his son was 5, he was playing with his friend next door.

“He went to his friend Bobby’s house to play. Bobby’s older brother, who was 12, went into the father’s bedroom, retrieved his shotgun, and accidentally or intentionally discharged it, fatally wounding Bobby, who died the next day. I know that could have been my son or one of my grandsons.”

Tomb said that 1.7 million children live in homes with a loaded, insecure firearms. The issue of guns in America is filled with alarming statistics. Thirty-one thousand Americans die from gun-related deaths every year, and firearms injure or kill 20,000 children and youth under 20 each year. Firearms are the second-leading cause of death among people aged 10 to 19.

Despite all this tragedy, gun control remains a divisive political issue. It can’t make any headway in Congress, and the real threats and dangers too often become mired in partisan bickering. In the mean time, tens of thousands of people are dying.

“We believe through innovation, new products can be introduced in firearm safety to make communities safer and save lives,” said San Francisco police chief Greg Suhr. “Those who say ‘Guns don’t kill people. People kills people’ are mistaken. Guns do kill people. We need better gun control, and to date efforts in D.C. have not been successful, but there is more than one way to skin a cat.”