Remember the Internet’s reaction to SOPA and PIPA? Welcome to save the Internet: part two.

Tomorrow Reddit, Mozilla and Tumblr (Yahoo) plan to team up with more than 5,300 other technology companies, human rights organizations and media properties to protest the NSA’s mass surveillance program. Dubbed “The Day We Fight Back,” the protest includes unsurprising participants such as the Electronic Frontier Foundation (EFF) and the American Civil Liberties Union (ACLU); new faces have also joined in, including Upworthy and Thunderclap.

According to the official site of the initiative, participants will be asked to “install banners to encourage their visitors to fight back against surveillance” — not as extreme a reaction as the internet blackouts of services like Wikipedia back in SOPA days. In addition, “employees of technology companies will demand that their organizations do the same.” As for the average Internet user, you’ll be asked to “develop memes and change [your] social media avatars to reflect [this initiative’s] demands.” 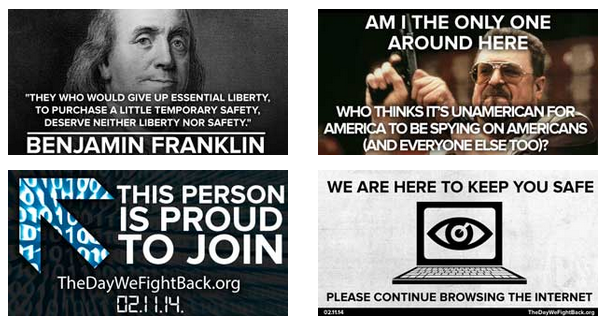 Rightfully so, much of tomorrow’s protest is inspired by the acts of Internet activist and technologist Aaron Swartz. According to the official site:

In celebration of the win against SOPA and PIPA two years ago, and in memory of one of its leaders, Aaron Swartz, we are planning a day of protest against mass surveillance, to take place this February 11th.

Together we will push back against powers that seek to observe, collect, and analyze our every digital action. Together, we will make it clear that such behavior is not compatible with democratic governance. Together, if we persist, we will win this fight.

It’s made clear in the above quotes that the overwhelming goal of The Day We Fight Back is to raise awareness. Hopefully with major backers, an impact can be left upon the general population and its representatives. That in mind, it’s disappointing to see major SOPA/PIPA protesters like Google and Wikipedia sitting this one out.