In a movie heist, there’s always a gap between when the intruders break in and when they make off with the goods.

“It probably took the Target hackers a while to understand what was going on inside that operation,” said Div in a recent interview with VentureBeat. “You can expedite the process in some way if you have prior information about the network and the layout, but we are saying that with our approach, we can catch it.”

If Cybereason detects suspicious activity, it will alert security analysts with a detailed, visual report. It will also provide a series of suggestions aimed at eradicating the breach.

“The fundamental change between our approach and other companies,” said Div, is that “we are assuming that the user doesn’t know how to ask the right questions.” 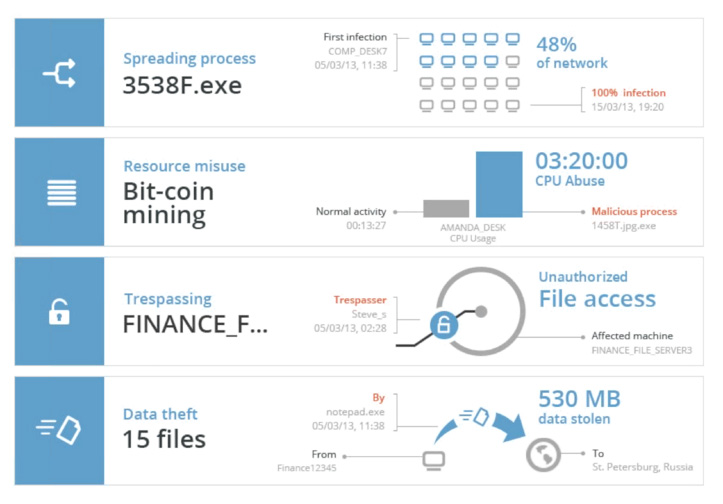 Above: A Cybereason report. Security analysts can click each section for more information.

Cybereason today announced that it has raised a $4.6 million funding round (its first) from Charles River Ventures. It will use the funds to expand its 18-person team and build out its Cambridge, Mass. headquarters. Currently, most of its employees work out of its office in Tel Aviv, Israel. The startup’s founding team comes from the Israeli intelligence core.

The startup intends to make its software generally available in the second quarter of 2014. DocuSign is one of its early access customers, which include “a bunch of Fortune 1,000 companies,” according to Dior. Cybereason is still working out an exact pricing plan, but its software will be available both on-premises and in the cloud.

The company is confident it’s filling a gap in the digital security market.

“Really, it comes down to this assumption that most enterprises have made around prevention. It’s just wrong for today,” Mark Taber, Cybereason’s vice president of sales and marketing, told VentureBeat. “The skills and the money are in the wrong place given the nature of the attackers.”