This is a guest post by Mariya Yao, founder of mobile design consultancy Xanadu.

In just a few short years, the number of people with smartphones has outstripped the number with clean water. The world is increasingly shifting computing tasks — and precious attention — to on-the-go devices.

What does this mobile renaissance mean for app developers? On one hand, millions more consumers with an insatiable desire for content now own smartphones. On the other hand, Apple and Google each have over one million apps live in their app markets. Competition to capture mobile users’ limited attention and cash is tremendous. Gone are the days where simple fart apps can generate millions in downloads and revenues.

So what’s an app developer to do? I talked to both seasoned mobile veterans and hopeful new entrepreneurs and compiled their top strategies for winning in today’s hyper competitive app market:

Getting featured Is not enough

No one denies that being featured by Apple or Google is a huge boon to developers. Ed Roman, a successful mobile entrepreneur and angel investor, estimates that a top banner ad feature in the iOS App Store store nets roughly one million downloads a day for an app. “Nowadays it’s harder to get featured, but being featured is more valuable,” says Roman whose latest release Rage of the Gladiator was downloaded over a million times after being featured on both iOS and Android.

However, most of the apps Roman analyzes experience an immediate crash as soon as their 15 minutes of fame are over. Developers cannot count on features alone to guarantee success.

“The average shelf-life of a top 1000 app is only 23 days” according to Anand Sanwal, founder of CB Insights, a data-driven analytics firm covering mobile trends. “Getting on top is hard. Staying there is harder.”

Roman agrees. His advice to startups is to allocate budget specifically to tuning acquisition and retention before launch. One way to do this is to launch in Canada or another English-speaking App Store where advertising is cheaper and iterate until an app’s metrics are solid. Roman recommends aiming for a 1-day retention of 40 percent, 7-day retention of 20 percent, and 30-day retention of 10 percent.

ASO Is the new SEO

Try searching for an app and you’ll likely get dozens if not thousands of results. Enter ASO, or App Store Optimization. ASO is to mobile apps what SEO is to websites and is one of the few ways developers can boost visibility and win free organic traffic.

David Barnard, founder of app development firm Contrast, dramatically boosted the performance of his app Mirror simply by changing the name to perform better under Apple’s search algorithms. His app shot to number one out of 1409 results for the search term “mirror” and skyrocketed from unknown app to over 2.5 million total downloads.

Barnard cautions that the ASO process should start long before you write your first line of code. He advises that new developers avoid app categories with over-saturated keywords like “photo” and “chat” and instead find niches they can confidently dominate.

These companies have the development and marketing budget to push out high quality, freemium products that overshadow paid apps made by single developers. “Even if smaller devs try freemium, they just won’t be able to get the reach they’ll need to make it work,” says Yarmosh. “Based on the expected conversion rates, millions of customers are needed to make thousands of dollars”.

Learn from the masses

Not all developers see the increased competition in the app store as a bad thing. Simon Czaplinski, a model and photographer turned mobile startup founder, sees competition as evidence of a thriving market filled with opportunities. “Learn from bad apps what not to do, and learn from good apps what to do,” suggests Czaplinski.

In preparation for building their current app Revel, a social photo-based scavenger hunt game, Czaplinski and his co-founder studied apps like Grindr, Blendr, and Tinder for their social dynamics, Words With Friends and Draw Something for their game mechanics, and Foursquare and Yelp for their location and map designs.

While smartphones have largely saturated the US and western markets, other countries are surging past in mobile growth. According to mobile apps research firm Distimo, 41 percent of global app revenue in December 2013 came from Asia, compared to 31 percent from North America. Research firm IDC estimates that China alone will ship over 450 million smartphones in 2014.

At the same time, the ratio of app developers to smartphone users is much smaller for non-English speaking countries, presenting an opportunity for developers in expanding markets. In addition to Asia, Africa and India both have billions of people going mobile in the next few years. The next Candy Crush Saga or Snapchat may very likely emerge from one of these new markets. 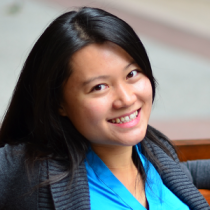 Mariya Yao is the Founder and Creative Director of Xanadu, a mobile design and strategy firm.