This month has seen the blossoming of venture market analysis in Russia, with no fewer than four reports dedicated to the field.

A study from PwC, with the support of state-owned fund of funds RVC, and another from investment company Rye Man and Gor Securities (RMG) offer general views of the market. Two other reports, published by venture fund and incubator Fastlane Ventures and East-West Digital News, provide narrower focuses.

Though their emphases and methodologies differ significantly, all four reports reveal the same trend: the fast growth of Russia’s venture market – which was embryonic just five years ago – has stopped; signs of maturation (or perhaps stagnation) are multiplying among most investment types and market segments.

“Investors have become more cautious in choosing projects for their portfolios, more experienced, professional and prudent. As for Western venture funds specifically, their interest in Russian companies remains low and restricted to a few e-commerce projects.”

“The main reasons for this are a lack of information about the Russian venture market, weak business contacts and an unfavorable investment climate. The poor investment climate remains one of the biggest issues hindering the growth of Russia’s economy,” the RMG analysts add. 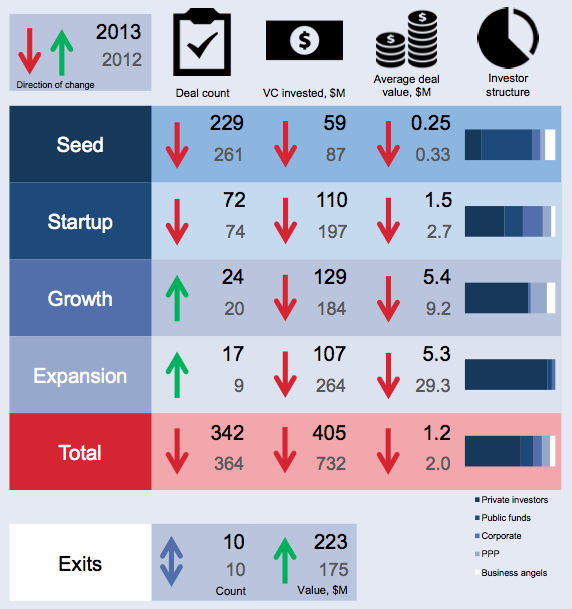 Focusing on the Internet segment specifically – with yet another methodology – Fastlane Ventures finds a slight increase in investment volume, with $667 million in 2013 – up from $643 million during the previous year. The slowdown is obvious when compared with the 130 percentincrease between 2011 and 2012.

“The seed stage boom is over, and the Russian Internet is reaching a new stage of development,” explains Fastlane investment manager Andrey Kulikov.

“Venture capital funds established in 2010-2012 are now completing their first investment cycle and will have to raise capital again in 2014-15. At the same time, there will be more exits. On average it takes about seven years from the foundation to the sale of a startup, therefore numerous companies created in 2006-2009 are now close to exit.”

Those interested specifically in the e-commerce segment will find in the EWDN research study on this topic a comprehensive list of the venture deals that have been publicly reported since 2010. Investment volume reached $362 million in 2012 – but no more than $235 million in 2013 (or $173 million according to PwC).

Lamoda’s giant fundraising in June 2013 accounted for more than half of this amount. Although it remained the primary investment destination over the past four years, e-commerce lost a bit of its traction in 2013, Fastlane notes. During that year venture investments in this segment accounted for 58 % of all investments in the Russian Internet market, or 10 percentage points below the 2012 level. Russia’s VC remains IT-oriented, confirms RMG, with 61% of total capital invested in 2013 – down from over 66% in 2012. Biotech and industrial tech projects accounted for less than 20% in 2013, matching the share in 2012.

PwC sees in this trend a reflection of market maturation, “with average indicators for transactions closer to those of the European market, where the average deal reaches just $1.4 million.” Fastlane also sees the market maturing in the Internet field: thus later-stage deals (C, D and E rounds) accounted for 45 % of total investment volume in 2013, compared with just 13% in 2011.

“Exits from successful projects have become more frequent, with the total value of exit deals higher in 2013 than in 2012 thanks to several large transactions. However, exits by private funds are still not numerous,” RMG notes.

PwC confirms that the number of exits almost doubled, from 12 to 21, while investor proceeds from these exits “grew more than fivefold, from $372 million to an unprecedented $2 billion.”

Another sign of maturation is the growing number of syndicated deals: “Market players are ready to share both profits and risks, while funds tend to specialize in a specific niche or segment rather than ‘play roulette,’” notes Alexey Solovyov of Prostor Capital.

The Russian state continued to play an important role in financing innovation in 2013, through state-owned venture funds – as illustrated by RVC and its 13 specialized funds – as well as via grant and infrastructure support (Bortnik Fund, Skolkovo) and numerous initiatives at the local level.

“This was largely driven by the growing involvement of state organizations in early project stages. Thus total grants in 2013 came to $102.8 million, down from $145 million in 2012.”

However, state funding is mainly focused on early-stage biotech and industrial tech projects. In the Internet segment, according to Fastlane, “there were at least three times less grants in 2013 than in 2011.”

From methodological discrepancies to diverging results

While most of the conclusions concerning trends and expectations in the VC market are similar in the PWC and RMG reports, the data sources and the respective approaches differ considerably. MoneyTree is based on data from Rusbase and Venture Database Russia – two databases that tend to tend to offer a rather flexible definition of what constitutes a venture deal in Russia. Meanwhile, RMG believes that Russian VC is defined by an innovative product/business model, deal size and a focus on Russia as the main market. On March 20 the Russian PE & VC Association organized a conference on methodological issues in venture market analysis – providing a glimmer of hope that next year’s reports will see more harmony in methodologies and convergence in results.

This article originally appeared in East-West Digital News, our partner in Russia.