There is apparently a lot of anonymous candor going around.

Just last month, Whisper and Secret, two hot apps for anonymously sharing things you’d rather not be seen saying, were reportedly raising a combined total of $40 million. And today, another app has launched to do something similar.

Truth is launching today out of a stealthy public beta. It’s an app that allows you to send messages to people anonymously, sure, but there’s a twist: You send messages directly to people in your address book. The company behind the app, Toro Technologies, says Truth is “the first one-to-one anonymous peer-to-peer messaging app.”

“Back in November when we originally had this idea, we had chosen to go with the name Secret and even bought the domain www.secretapp.com,” cofounder and CEO Ali Saheli told me via email yesterday. “We had the app submitted to Apple when suddenly Secret launched, and we were just shocked and surprised. Initially we thought about keeping the name, but we soon realized we wouldn’t be able to compete financially in court. I mean, c’mon, they were backed by Google!” 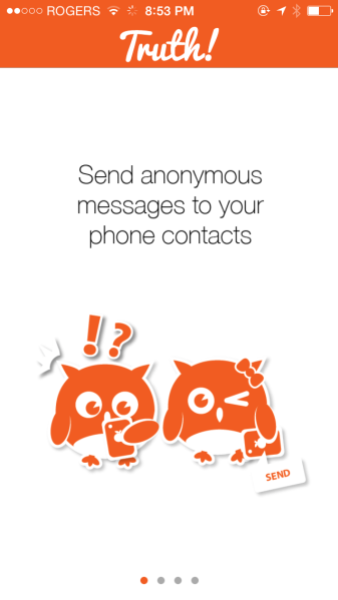 Sending a “truth” to someone is almost like sending an email or a text: Select a recipient, tap the message, hit Send, and watch a Flappy Bird-style owl wiggle its wings as your missive flies into the interwebs. If the recipient is another Truth user, the message will show up in his or her app — from an unknown sender, of course — and trigger a notification. If not, the recipient will get a text message with part of the truth you’re sending … and, of course, a link to download the app.

Exactly. Want the full message? You’ll have to download the app.

Viral tactics like that have driven Truth up to 90th position in the Canadian iOS app store rankings in the three weeks since its initial beta launch — ahead of Secret and GroupMe in the social network most-downloaded list. (Often app developers test their apps in Canada, New Zealand, or Australia, fine-tuning user acquisition and user interfaces before launching in the U.S.)

According to Saheli, college students are one of Truth’s biggest user groups.

“The two most common use cases are flirting between classmates and giving honest feedback in the workplace,” he said when I asked what people used Truth for. “Overall, we have seen most of our users are college students.”

Clearly, this kind of app is more personal than Secret, which simply allows a person to create a generalized message and float it on the waters of the app’s mobile social network. Messages in Truth are directly and personally targeted.

“Like any other platform, we have some negative messages in the system but overall the percentage is lower than we expected. We take this issue seriously and will always ensure that the user has the power to control the conversations they have.”

I sent a message to my teen daughter to test the service. Her first words?

“I thought that was from you,” she said when I brought it up. Then, when we chatted about the app some more: “Seems like it could be quite dangerous.”

Clearly, however, there’s an appetite for this sort of anonymized messaging that traditional social networks such as Twitter, Facebook, and LinkedIn are not providing.