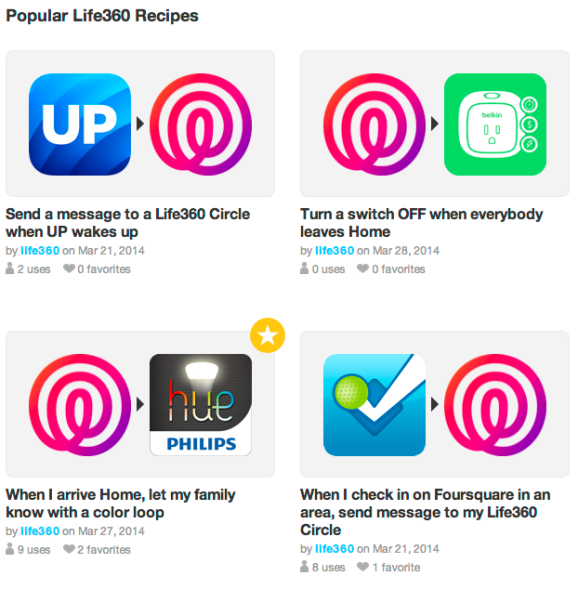 If all your family members have left the house, then automatically turn the lights off. Such conditional home obedience is one of the projected benefits of a new integration between family app Life360 and IFTTT, the “if this-then that” provider.

In software, if/then statements have long been common regulators of what to do when certain conditions are met, and IFTTT’s vision is to make services easily conditional for non-programmers.

There are plenty of possibilities. Linden Tibbets, the cofounder and CEO of IFTTT, told VentureBeat that there are “just under 10 million personal Recipes, which actively run 10 to 12 million times a day,” plus over 150,000 templates that can be used to make Recipes.

The code behind the IFTTT template icons – connecting, for instance, Life360’s API with the API for Philips’ Hue smart lightbulb – is created by those companies or by third-party developers. But, Tibbets said, “all of the Recipes created on IFTTT have been set up by an end user,” who has mixed and matched the components to link some condition to some service.

“[The Recipes] are enabling end-users to have control over how services talk to one another,” he told us.

A service provider, like Life360, is an IFTTT Channel, of which there are currently about 85, including the New York Times and Evernote. Tibbets said that no Channel is exclusive in a category, so there might be other family-related Channels.

But how many of Life360’s 30 million registered users actually have, say, Philips’s Hue smart lightbulbs? “[Smart lightbulbs] like Philips Hue are still very much a niche product,” Life360 cofounder and CEO Chris Hulls acknowledged to VentureBeat.

As is the smart garage door that closes when you drive away, or the smart refrigerator that signals it’s out of milk when you leave your office. “A lot of those could be written off as parlor tricks,” he said.

But there are a core set of useful if-then functions that use existing services – send a message to my family when I create a new Facebook status message – or that performs essential tasks – set the home alarm when no family member is home.

If those become commonplace, then life management could largely be about setting conditions.