Two salespeople might not sound like much of a salesforce. But for software company Loggly, that’s plenty.

The 5-year-old, 26-person company has been growing quite quickly since the beginning of the year, when it brought on salespeople for the first time. The growth points to the inherent value of cloud-based management of logs, especially for companies that use lots of other web-based services. The data is already out in other places, and you don’t necessarily need to move it all to your data center.

“We added more new revenue last quarter than we added in all of 2013,” Loggly chief executive Charlie Oppenheimer said in an interview with VentureBeat. Recurring revenue was up almost 60 percent over the previous quarter, with the number of paid accounts going up by 35 percent. And the amount of data that Loggly handles doubled last quarter, too.

A major rethinking of the service factors into the momentum for Loggly, which takes information from web servers, databases, and data center hardware; cleans up the data for easy sifting; and helps you create dashboards to get a sense of how well everything is running.

Last year Loggly revamped “every page, every dialog, every button, every menu, every piece of language, every font, every color, every line — everything first — and then we started designing the foundation,” Oppenheimer said. You decide on a vision and then build the technology to make it happen, he said. That’s an approach he learned while at Apple, where he ran product management for Macs and the Mac OS. “The redesign hit in September, and “now it’s really starting to take hold,” Oppenheimer said.

One aspect of the redesign that Loggly has pushed are “stories,” which explain why something happened to a given application with the help of data visualizations. It’s much more useful than trying to understand what’s happening in logs by searching through them the same way you’d search the Internet, Oppenheimer said. 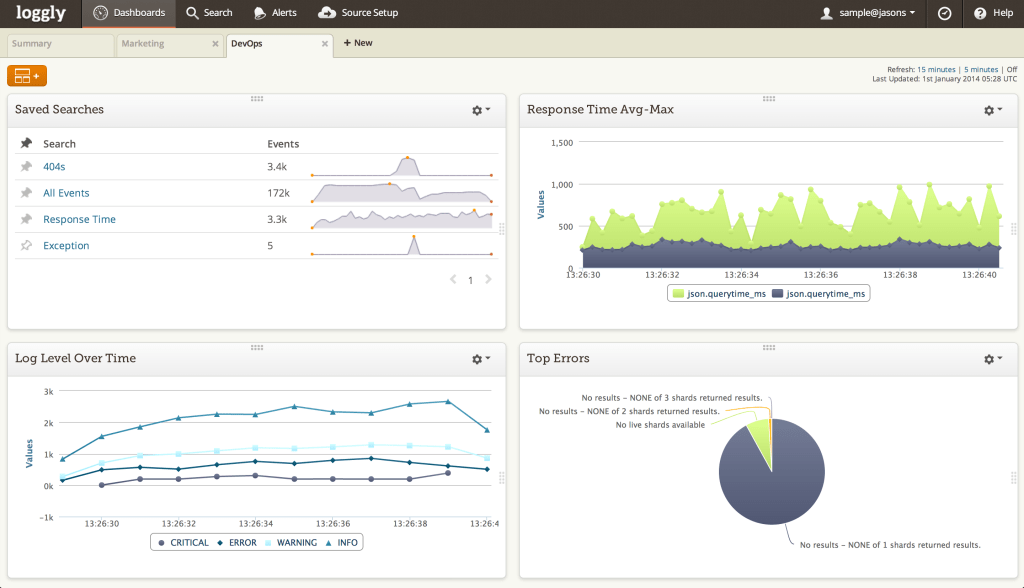 More generally, people seem to be waking up to the appeal of storing and analyzing all of those logs in the cloud, which can accept lots and lots and lots of them. Loggly competitor Sumo Logic, which raised $30 million in 2012, has been adding customers as well. And it helps that log-management heavyweight Splunk has made changes to its cloud-based Storm service. To be specific, Oppenheimer said that Splunk “gave up,” opting to sell a hosted version of its main software for onsite data centers.

And beside the increasing acceptance of cloud-based log management, a presentation from Jim Nisbet, the company’s vice president of engineering and chief technology officer, at Amazon’s Re:Invent conference in November has also brought more attention to Loggly’s software, Oppenheimer said.

So up until the beginning of this year, the company has not had to resort to all-out sales. Instead it has relied on more organic promotion of its service and underlying architecture. It’s done a little search-engine optimization and a bit of blogging, Oppenheimer said, but for the most part, promotion hasn’t been a focus. Now, though, it’s time to bring lots more companies on board as paying customers.